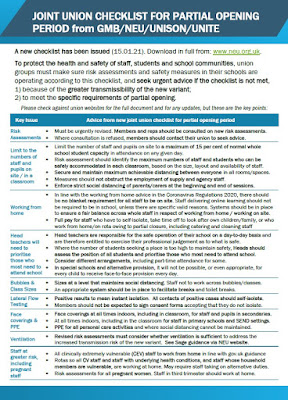 The determined stance taken by thousands of NEU members at the start of term in refusing to return to an unsafe workplace helped ensure that most schools are now only open to reduced numbers.

However, too many classrooms remain dangerously full. Too many schools are making unreasonable expectations. That’s why it’s vital that NEU members continue to use their collective strength to protect the safety and welfare of staff and our school communities.

Every school group immediately needs to read the new ‘checklist for partial opening’ that was issued on Friday by the GMB, NEU, Unison and UNITE. It contains vital guidance to union members to make sure that schools are as safe environments as they can be, particularly given the greater transmissibility of the new Covid variant. I have produced an A4 poster summarising the key points.

NEU Districts are reporting on gains that have already been made by keeping up the pressure on Local Authorities, e.g. reversing unsafe Lateral Flow Testing isolation protocols.

Enormous pressures are being put on Heads to take in greater numbers of keyworker and vulnerable pupils than safe distancing and ventilation requirements allow.  We must “insist on the checklist” to protect the health and safety of our colleagues, our students, and our school communities.

“We are strongest when we act collectively”

As the message from the NEU General Secretaries makes clear, the union “will back every workplace group that feels the need to take action”. Their guidance recommends the following steps are put into place as quickly as possible:

* Speak with members at an online meeting and see if they share common concerns.

* Arrange a meeting with your head and/or SLT to raise concerns.

* Report back on the response from leadership and discuss next steps with members, including escalation and further support.

* Escalate concerns with your branch and seek more support.

Two forms of action are mentioned in the guidance:

1) Moving quickly towards a ballot for industrial action.

* Trade union legislation means that the legal ballot process takes a few weeks, and a mandate for action also requires a good turnout in a postal ballot.

* To avoid delays, reps should check their membership lists immediately. Make sure the Union has an accurate list of your current membership and home addresses are correct for a postal ballot.

2) The union will support members' use of ‘section 44’

* Ask the Union for advice so that section 44 letters can be tailored to your school circumstances.

A national ballot as a safeguard against an unsafe return

As the New Year U-turn showed, we can make gains when we stand together across a workplace, or a group of workplaces, but we are even stronger when we act together as a whole union.

With the NHS still under huge pressure, none of us knows how long this period of ‘partial reopening’ will need to last. But it’s clear that the Government want to try and fully open schools as soon as they can. We must again make clear that full opening must be “Only When It’s Safe” to do so.  I believe that launching a ballot for national action now could help make sure we have the safeguard of an action mandate in place where it might be needed to oppose an unsafe return.

Reports I have received from around the country indicate there are some particular threats ongoing at present. These include:

Nursery classes are being bullied to stay fully open under the threat of financial penalties. In at least two London boroughs today, Heads that had implemented rotas of safer, smaller, numbers of children have been told that they must open fully or lose income for the places they do not believe that they can safely fill at the present time. Schools in other areas have had similar threats.

This is both outrageous and dangerous. As the NEU’s #MakeEarlyYearsSafe model letters, calling for emergency funding to be immediately provided to cover additional Covid costs, explained to MPs:

* Anthony Costello, SAGE member and UCL professor of global health and former WHO director, said in The Mirror on 9 January: “We are in a national crisis with a pandemic out of control. We should have no nurseries open.”

We need to give confidence to members in Early Years to stand up to these threats. Make sure to identify the members teaching in Nursery Classes in your school lists and build for urgent action.

As in the first lockdown, the damage caused by the privatisation of most supply teaching has left many agency staff at severe financial risk. Too many agencies will not even agree to furlough.

Schools should not be looking to save money at the expense of supply teachers, especially not those where a long-term engagement had previously been agreed. The needs are still there to be met. DfE guidance now confirms that agency staff can be used for remote, as well as face-to-face, teaching.

Support staff are under some of the greatest pressures at present. Firstly, some schools are operating rotas that insist support staff are in schools all the time while teachers are more likely to be allowed to work from home. We must insist on equality of treatment.

The new joint union checklist includes some important points in defence of support staff colleagues. One of these is the statement that “systems should be in place to ensure a fair balance across the whole staff in respect of working from home and working on site”.

Reports are also coming in of schools using the lockdown as an opportunity to launch restructuring proposals where support staff jobs appear to be particularly at threat. Collective action will be needed to oppose cuts and to defend education and jobs.

Sadly, while many schools recognise the difficult and stressful circumstances in which educators and pupils are working, some poor managers still seem to be unable to prevent themselves putting staff under unacceptable pressures through unreasonable workload demands and/or by insisting on inappropriate monitoring of online learning. Once again, a collective response is the best way to back up our entirely reasonable demands that good managers support, not bully, their colleagues.