Given the worryingly high infection rates in England, the advice being issued via the Government/NHS Test & Trace "Schools and Colleges Handbook" is of real concern.

The advice contained within the Handbook risks turning Lateral Flow Testing (LFT) into a mechanism that helps to increase transmission rates instead of cutting them.

This is because the guidance clearly suggests, to both staff and students, that - as long as they give consent - they would be able to continue to attend school, rather than self-isolate, if they are found to be a close contact of a positive case. Instead, they would take daily LFT tests as an alternative to make sure that they remain 'negative'.

Such a suggestion would have obvious attractions to staff and parents as it appears to provide a safe way to ensure teaching and learning is not disrupted. But it is absolutely NOT a safe proposal and I would strongly advise that such consent should NOT be given. Any member of staff pressurised to do so should seek urgent Union advice.

Yes, the LFT tests can be useful to detect additional asymptomatic positive cases that might otherwise have gone unnoticed but they are absolutely not reliable enough to be used as an alternative to isolation.

Here's the latest advice from the British Medical Journal, explaining why not:

" The rapid test kits most widely used in UK universities, schools, and care homes were shown to detect just 48.89% of covid-19 infections in people without symptoms when compared with a polymerase chain reaction (PCR) test."

" Independent Sage said testing should be used as a means of 'finding cases rather than as a means of determining whether or not people are infected, given the high negative rates' "

“A negative test should not be taken as an indication that someone is not infected or to relax other mitigations at either an individual or collective level ".

" Testing should be preceded by a clear information campaign to make sure people understood that a negative test 'does not mean you don’t have covid'.”

A damning BMJ opinion piece, published yesterday by three Public Health experts, is also posted here. It calls on the government "at least to pause the rollout of rapid asymptomatic testing using the Innova test, including its use in care homes, schools, communities and self-testing by untrained people at home, until clearer messaging on the risks of negative results can be developed".

Some employers have recognised the significant concerns about reliability. For example, I understand that Coventry Council has confirmed that this is now their position today after discussions with the NEU locally. These employers are, correctly, not proposing that LFT tests are used as an alternative to isolation but as an additional tool whilst maintaining other safety measures and isolation protocols. However, this is not the case in all areas.

The current Government model consent form found here clearly states under point 11 that "I consent that if a close contact of my child tests positive but I / my child has tested negative, I / they will continue to attend school / college but will be tested every day at school / college for 7 days".

Current NEU advice (issued 08/01/21) can be found here. it stresses the logistical concerns about introducing testing rather than the reliability issues. However, it does clearly state that:

* Where pressure is applied, NEU members should respond collectively to the head teacher/principal and seek the support of the branch/district secretary if necessary.

* The NEU advises that members who are the contact of a positive case should not participate in serial testing and should instead self-isolate in accordance with Government guidelines. 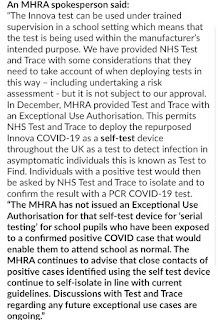 UPDATE (2) (14/01/21) - In a move that confirms the concern amongst medical professionals at the inappropriate use by the Government of Lateral Flow Testing, the Guardian has reported tonight that the Medicines and Healthcare products Regulatory Agency (MHRA) has told Ministers that they have NOT authorised the daily use of tests due to their concerns, as outlined above, 'that they give people false reassurance if they test negative'.

UPDATE (3) (15/01/21) In response to Government insistence that they had received regulatory authorisation, Schools Week has published a MHRA statement making clear that this is NOT the case. The report suggests that the authorisation that was granted was solely “to be used to detect cases, but they have not approved it to be used as to do what they call ‘test to enable’ which is this testing to let children stay in class.”

“NHS Test and Trace and Public Health England have reviewed their advice, and concluded that in light of the higher prevalence and rates of transmission of the new variant, further evaluation work is required to make sure it is achieving its aim of breaking chains of transmission and reducing cases of the virus in the community.

“We are therefore pausing daily contact testing in all but a small number of secondary schools and colleges, where it will continue alongside detailed evaluation.”