Defend the Right to Protest, Oppose Sexual Harassment and Violence

The response to the abduction and murder of Sarah Everard has highlighted the growing determination, particularly amongst young women, to challenge the endemic sexual harassment experienced by 97% of them. 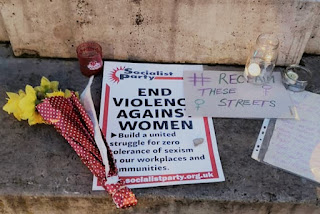 That gender inequality and violence is rooted in our unequal society, a society which trade unionists and educators can help organise to change. But the shocking scenes in Clapham last night haven’t only exposed the growing threat to the right to protest against such injustice and inequality. These events have also exposed the hypocrisy of politicians who either supported - or failed to oppose - the draconian legislation used to declare peaceful vigils as ‘illegal’ and who are preparing to do the same when the Police, Crime, Sentencing and Courts Bill goes to Parliament tomorrow.

A 2017 NEU survey confirmed the sexism and sexual harassment that young women and girls encounter daily in schools. For example, almost a quarter (24%) of female students at mixed-sex schools reported that they had been subjected to unwanted physical touching of a sexual nature while at school. Sexist language and gender stereotyping were also commonplace. Yet only 14% of students who had experienced sexual harassment said they had reported it to a teacher.

The NEU has called for consistent and ongoing action from schools and Government to challenge sexism in schools. The number of young women that took part in the vigils that did take place over the weekend showed that many are ready to take a stand against the gender inequality and sexual harassment they have suffered.

Women have again been hit hardest by the pandemic. Schools, where women make up most of the workforce, face further cuts and job losses, particularly amongst support staff. Schools have been left to fully open without the mitigations needed to protect safety in cramped classrooms with poor ventilation.

Given the ongoing risk of rising community infections, it has been understandable that some people have questioned whether public protests should take place. But the risks of infection are considerably less in outdoor environments than the indoor ones like schools and workplaces that the Government insists are “safe” to attend. If the Police had liaised with vigil organisers, a safe and socially distanced event could have been held in Clapham.

The Right to Protest

Instead, the Metropolitan Police used the draconian powers handed to them in the Coronavirus Act. Police were filmed manhandling and arresting young women in scenes that showed a complete lack of understanding as to why so many had gathered together.

As Unite the Union have said in response to these events: "Women gathering in memory of a woman whose life was taken were doing so responsibly, in respectful memory. This grief should have been honoured, not violated” “There is also a very concerning move to limit freedom of protest that will be before parliament this week. We urge those alarmed by the scenes this evening to join with us and voices across civil society to speak as one in defence of our rights to peaceful protest, to support democracy and to keep the powers of the police in check."

Trade Unions must use their strength to oppose injustice and inequality

A few months ago, UNITE successfully challenged in the High Court another attempt by the Police to use the Coronavirus Act to prevent legitimate protest, in this case the right to picket outside your workplace during strike action.

Trade unions have always relied on protest to defend our members from inequality and injustice. Unions have also been at the heart of many of the gains won by women against the sexism and oppression inherent in our society.

Trade unions and trade unionists must now come together to support those wishing to protest against sexual harassment and gender violence and to make sure that the right to protest is defended for all.

Email ThisBlogThis!Share to TwitterShare to FacebookShare to Pinterest
Labels: Women