Uncertainty reigns over the effectiveness of Lateral Flow Testing in Schools

Perhaps the only certainty in schools in England since they opened fully to pupils on 8 March is that staff have once again stepped up to meet the latest challenges thrown at them as best as they can. 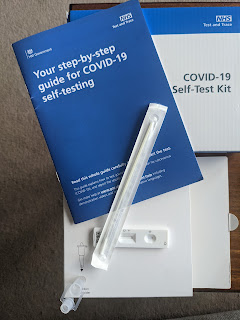 Otherwise, stress and uncertainty remain - from a lack of information from Exam Boards over this summer’s assessments, to a continued concern about levels of Covid transmission within schools.

Lateral Flow Testing was supposedly meant to help clarify the latter issue – at least in secondary schools. But the reality is that the lack of any genuine prior piloting of these devices in school settings means the school testing programme is being rolled out despite serious uncertainty about its likely effectiveness in identifying positive cases.

Is the ONS modelling wrong – or are LFDs simply failing to detect many positive cases?
A quick comparison of two pieces of official statistical evidence released at the end of last week shows that something doesn’t add up.

On 19 March, the ONS produced the latest weekly results from their ongoing ‘Infection Survey’. Their modelling, based on PCR test sampling that will include both asymptomatic and symptomatic cases, shows a continued welcome decline in the percentage of the UK population testing positive.

In Wales and most English regions the estimated positivity rates are still falling. However, rates may be levelling out in Northern Ireland and northern regions of England. In Scotland, it appears positivity rates are starting to rise again. As Independent SAGE have pointed out, this may well be linked to rising case numbers amongst primary pupils since a phased primary school return began in Scotland on 22 February.

However, the data that I want to concentrate on here is the estimated positivity rate for young people in the secondary school age range. The ONS estimate, for England only, is a positivity rate of 0.3% or 1 in 333 testing positive.

Separately, on 18 March 2021, the Government released data on the results from Lateral Flow Devices (LFDs) in schools, and some other community settings, from 4 to 10 March.

The sharp increase in LFD Testing carried out on secondary school students after 8 March is shown in the following graphs from the LFD report: 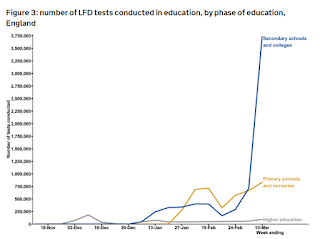 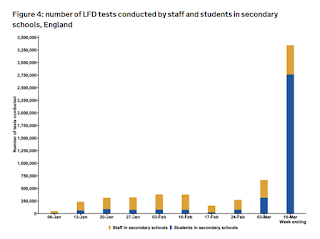 The ONS estimate suggests 6 in 2000 secondary school students should test positive, but LFDs have found a positivity rate of only about 1 in 2000.
Even taking into account that some positive cases might be identified symptomatically without a LFD, that's a very significant discrepancy. Is it because the ONS modelling is wrong – or because LFDs are missing the majority of cases? The evidence suggests the latter is far more likely to be the reason for the discrepancy.

The 18 March 2021 Report itself reports that the LFD data “should be treated with caution whilst the understanding of the data and its quality improves”. This is in part owing to the fact that individuals may report more than one test and that some results may not be reported – but there is a more concerning underlying issue and that is the reliability of the LFDs in comparison to PCR testing, particularly in a school setting.

From the very outset last summer, when Ministers came up with their “Operation Moonshot” plan for mass testing, its own advisers in the Scientific Advisory Group for Emergencies (SAGE) warned that “the cheaper, faster tests that will be useful for mass testing are likely to have lower ability to identify true positives (lower sensitivity) and true negatives (lower specificity) than the tests currently used”.

However, a clinical evaluation went ahead that claimed that “Lateral Flow Tests are accurate and sensitive enough to be used in the community, including for asymptomatic people”. However, a closer reading of the University of Oxford evaluation report shows that, while the Innova LFD test had a sensitivity of 79.2% (156/197) for all PCR positive individuals when used by laboratory scientists, this fell to 57.5% (214/372) when carried out by self-trained members of the public. This, of course, is how school staff have now been asked to conduct the testing. 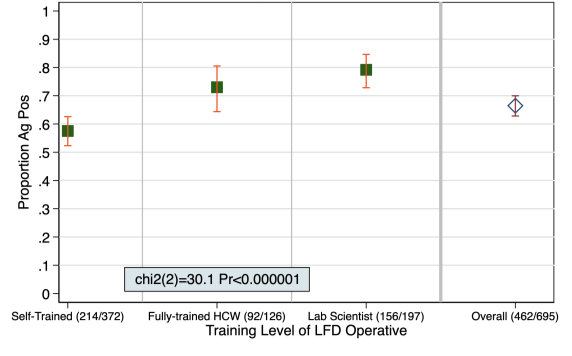 A further two-week pilot of mass testing using the Innova devices was carried out in Liverpool. It only confirmed concerns over the accuracy of the Innova tests. A Liverpool University Report on the Pilot concluded that “the Innova SARS-CoV-2 antigen lateral flow device sensitivity was lower than expected (based on the preceding validation studies) at 40% but identified two thirds of cases with higher viral loads”.

This was confirmed to the Government in a paper presented to the 70th meeting of SAGE on 26 November 2020 that said “emerging evidence from Liverpool is that the lateral flow tests being used are not as sensitive as had been expected from the test validation”.

The 40% sensitivity estimate – even lower than the sensitivity rates reported in the initial Oxford University clinical evaluation report - is explained below. Only 28 of the 70 cases detected by a PCR test were detected by the Innova Lateral Flow Test:

This second table shows how the majority of the cases that were not detected were for cases where the “Ct level” was high – or, in other words, where the “viral load” was low.

But asymptomatic children are more likely to have a lower viral load. Therefore, the sensitivity rates in a school setting may be even lower than the 40% estimate found in the Liverpool pilot.

In short, the initial evaluations of the Innova tests in practice suggest that they will fail to find the majority of cases in our school students and that “false negatives” will be common.

Of course, as staff are already finding, explaining to a student who has been told they are “negative” that this may be a false reassurance - and that they need to maintain social distancing, mask-wearing and all the other necessary mitigations, becomes more difficult.

(The unreliability of the tests also means that there may also be “false positives”, which could lead to children isolating without good reason, as explained in other articles).

So where are the scientific studies into the use of Innova tests in schools?

So, could the discrepancy between the ONS modelling (6 in 2000) and the results so far found in schools with LFDs (1 in 2000) be down to their lack of sensitivity when being used on young people in a school setting (or indeed, a home setting, as will soon be the case) ?

Scandalously, there is no clear data available because the Government failed to carry out any proper pilot into their use in schools. For example, the original Oxford University evaluation listed the settings in which the Innova tests had been trialled and their results compared with those from PCR tests:

But, as the table shows, where school settings were involved, none of the results were checked against PCR tests at all!

The Government claim they then carried out a further “pilot” into the use of Innova tests in schools. Indeed, Schools Week has reported that part of their “flimsy” evidence backing up their use of the Coronavirus Act to prevent Greenwich council closing its schools, was a claim that closing schools would prevent them using “testing programmes” – and that two Greenwich schools were then “involved in a pilot testing programme”.

But, as an article on the DfE blog makes clear, this pilot was about trialling the use of LFDs to “minimise staff and student absence” by offering them the opportunity to “remain in school and be tested daily rather than self-isolate when they were identified as COVID-19 contacts”. Were the DfE happy to allow participants to ignore their legal responsibilities to self-isolate under their own Government’s legislation? It was certainly without the clearance of the MHRA, the Medicines and Healthcare products Regulatory Agency as also revealed by Schools Week and discussed on my blog in a previous article.

Instead of trialling an unsafe procedure which they were then forced to abandon, the Government missed another opportunity to compare the results from LFDs with those from PCRs. Instead, schools are being expected to run a testing system that has had no serious prior evaluation about its appropriateness in such a setting.

Sadly, there is a risk that the low number of positive cases detected through LFDs will give a false reassurance about the amount of transmission taking place in schools.

For example, I was disappointed to read the Director of Public Health for Lancashire, where I am a member of the NEU Branch, saying that "thankfully, the positivity rate in our schools remains extremely low. Between Monday, March 8 and Sunday, March 14, 47 tests taken by secondary pupils were reported as positive, from more than 71,000 tests”.

For all the reasons explained above, this is a false conclusion to draw. Actual positivity rates, and transmission risks within schools, may be far greater, particularly in those areas where local infection rates remain of real concern.

The table below, which I have compiled from official Government data, shows that on 13 March, at the end of the first week of full opening of schools, 34 English Lower Tier Local Authorities had infection rates of over 100/100,000 population over 7 days – and in most of these areas, rates were increasing. Looking at the full UK data, then Merthyr Tydfil and Anglesey in Wales, plus several Scottish Local Authorities, also have similarly worrying high infection rates. 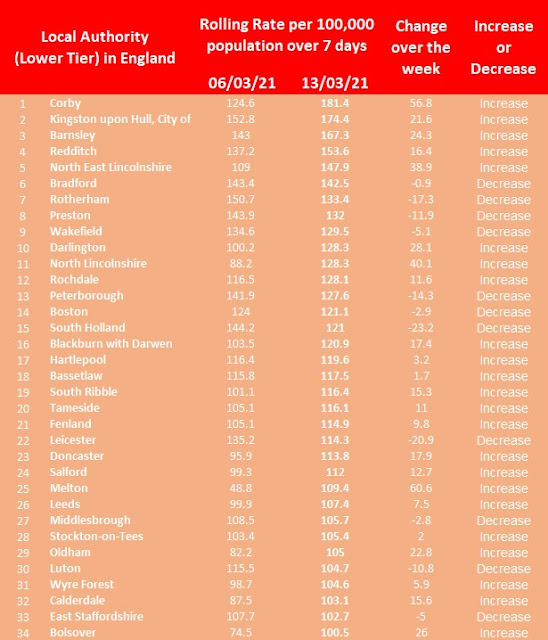 And, while Lateral Flow Testing in schools may be missing many positive cases, Government data nevertheless shows that the numbers that are being recorded are also on the rise. This is a further indication that, just as was expected, infection rates in schools are, indeed, starting to climb once again. 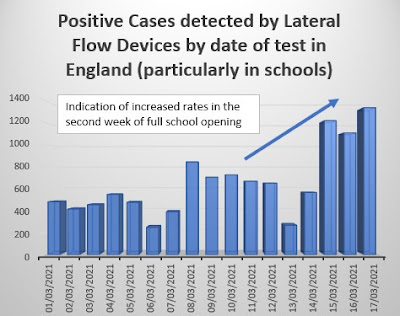 Despite all the good work that is being done with vaccination, the risk of a further spike in infections remains. We must continue to fight for the mitigations necessary to reduce transmission risks in schools and their local communities.

A real concern! And something I suspected having recently volunteered as a test volunteer for my son's school, where there were apparently no positives from 500+ students tested 3 times each.