An educators' DGS on an educator's salary 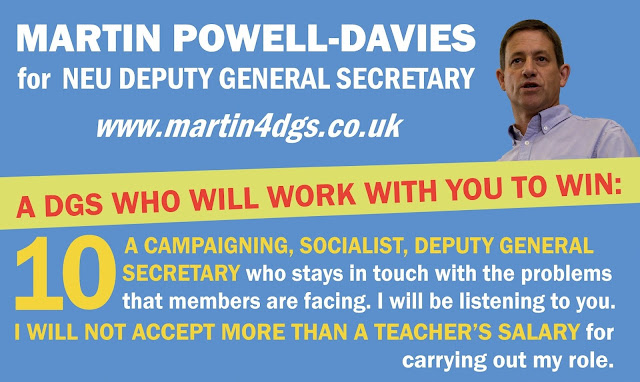 I am standing to be the first elected Deputy General Secretary of the NEU based on the ten clear campaign pledges that I made when I launched my campaign in January. As part of those pledges, I am committing that, if elected, I will accept no more than a teacher's salary for carrying out my role.

A commitment to show I am not standing for personal gain

I have not emphasised this commitment during the campaign so far. I understand that, above all, NEU members will elect a DGS that they believe best provides the clear leadership needed to help defend our jobs, pay and conditions, and education as a whole. Indeed, I am standing in this election because I, and those who have asked me to stand, absolutely believe that my proven record demonstrates that I am that candidate.

However, I have made a commitment to stand on a teacher's salary to demonstrate that I am not standing in this election for personal gain, but solely because I want to help lead this Union against the attacks we face from this Government.

Staying in touch with the problems members are facing

The question about DGS salary has been asked of the three candidates in a number of recent hustings, particularly from supply members. That's no surprise because if you are a supply teacher being exploited by agency pay rates, a colleague who has perhaps struggled even to be furloughed, and now faces another summer without income, a certain suspicion faced with candidates standing to be paid £88,000 as a trade union leader is perhaps inevitable!

I am standing to be a DGS on a teacher's salary because I want to be clear to the low-paid supply or support staff member, to the young teacher struggling to pay their rent, to the academy rep angered at the excessive salaries being paid to their CEO, that I am still being paid as I would be as a teacher, and not on what equates to a significant school leadership salary. Indeed, any pay rises I would take would only be the pay awards we manage to win as a Union as a whole under the School Teachers' Pay and Conditions Document.

Donating my additional salary back to the movement

In answer to the question about DGS salary, I have been the only candidate who has made the commitment to be paid on a teacher's salary.

This is not a commitment that I have made lightly, nor without looking seriously at the financial implications for me personally. As someone with their family home in Kendal, as DGS I would probably need to meet the additional costs of renting somewhere to stay in London. That's important so I can then carry out my role at Union HQ, fully taking part in the informal as well as formal discussions with staff, Executive members and other colleagues. But, as a DGS also with my permanent home outside London, I hope I can also be someone who demonstrates that the Union is not only London-based. I will travel and speak to members across every region and nation. 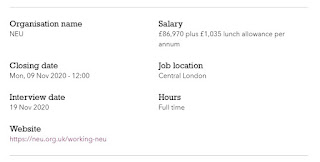 However, I believe that the role can be - and should be - carried out on a teacher's salary. While the exact pay for the elected DGS post hasn't been released, the job advert for the equivalent appointed NEU DGS listed a salary of £88,000. After tax, NI and other deductions, that equates to a take-home pay of perhaps £4,500 a month. If that's the rate that the staff unions have negotiated for the posts, then I am not asking for that to be changed, meaning other staff colleagues' salaries might be cut. However, as an elected DGS, I pledge to accept only the teacher's salary that I would be entitled to as a UPS3 teacher, taking home perhaps around £2,900 a month.

If there any unavoidable additional expenses that it turned out in practice could not be fully met within that, such as travel fares, then I would also declare those fully. Obviously, if I am elected to the post, the details can then be confirmed and I commit to publicly sharing the information so that members can see that I am carrying out my election pledge. My commitment is to use as much of the difference in take-home pay as I can - which my initial calculations suggest could be up to £1,600 a month - to donate back to the movement.

Rather than being for personal gain, I would use the difference to support solidarity campaigns and hardship funds and, at least in a small way, to support trade unionists and socialists to be able to counter the arguments put over by those so well-funded by big business who are seeking to cut and privatise education and the rest of our public services. 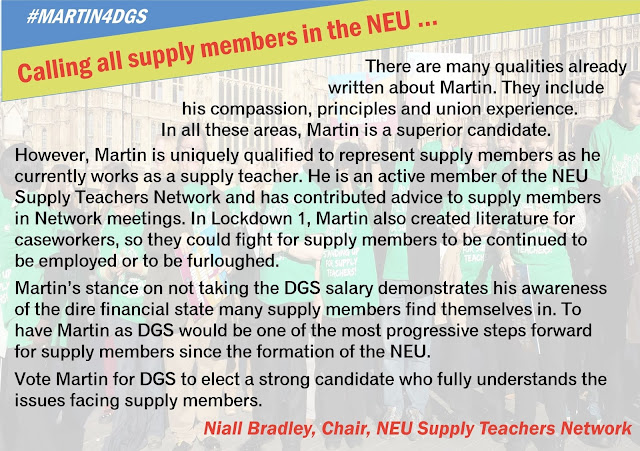