The "School Funding in England" Report published today by the National Audit Office (NAO) is further evidence, if it were needed, of the continued squeeze on education funding, particularly for those children and families with the greatest needs.
Of course, it is exactly those communities that have been hardest hit by the pandemic. Far from helping children "catch up", the NAO Report confirms that Government policy on financing of schools is only widening inequalities in education.

"Funding cannot be 'fair' if it is not sufficient"
The NAO's 2021 Report follows five years on from another important Report that the NAO released in 2016 on the "Financial Sustainability of Schools", written at a time when the damage being caused by school cuts was being highlighted by the education unions.
As I blogged at the time, "the attempts by the Tories to cover up these cuts by using a new 'National Funding Formula' to redistribute spending from some areas to others should fool nobody". As the NUT's Press Release stated, "far from being the levelling up that some councils and heads have demanded, this is a levelling down ... funding cannot be ‘fair’ if it is not sufficient". These warnings have been confirmed, five years on, by today's new National Audit Office report.
First of all, the NAO confirm that between 2014-15 and 2020-21, funding per pupil for schools was more or less frozen - increasing only by 0.4% overall in real terms. The funding per sixth-form student has been particularly severe, falling by 11.4% in real terms.
But within that effectively standstill budget, the implementation of a "national funding formula" has, just as unions warned, meant a redistribution of an insufficient overall budget away from schools previously better funded on the basis of the greater needs of their school population.
The NAO Report finds that: "Between 2017-18 and 2020-21, average per-pupil funding for the most deprived fifth of schools fell in real terms by 1.2% to £5,177; over the same period, average per‑pupil funding for the least deprived fifth increased by 2.9% to £4,471".

The Report is also clear in its finding that "the Department has shifted the balance of funding from relatively deprived parts of the country towards less deprived areas".

Schools have been forced to cut posts
And the NAO confirms that over the five years since their last Report, schools have been forced by inadequate funding to make cuts. With staff costs being by far the greatest call on any school budget, those "savings" have inevitably been made through jobs being cut. Job losses also inevitably mean more pressure on those staff remaining and more children without their needs being fully met.
The NAO Report that the DfE's own estimates show that, "between 2015-16 and 2019-20, cost pressures on mainstream schools exceeded funding increases by £2.2 billion, mainly because of rising staff costs. Teaching staff costs increased by an estimated £3.6 billion (17%) between 2015-16 and 2020-21, because of rises in teachers’ pay costs and higher pension and national insurance costs". This, of course, at a time when real-terms pay was being cut for staff! 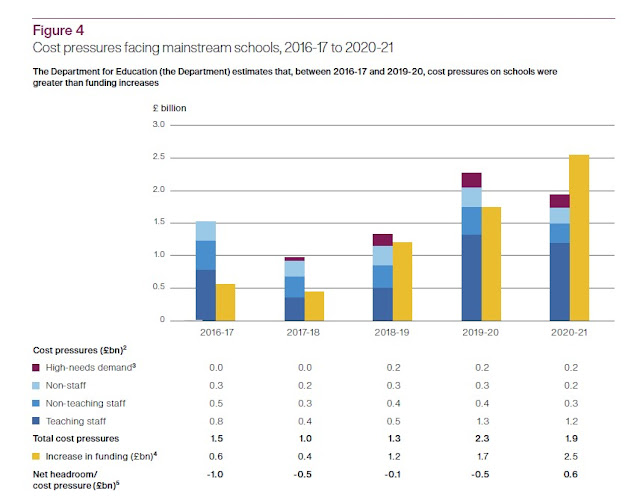 The Report also highlights the particular pressure on the lack of adequate funding for SEND, reporting that "Another significant cost pressure on mainstream schools is supporting the increased proportion of pupils with education, health and care plans. This cost grew by around £650 million between 2015-16 and 2020-21". Again, of course, this is a pressure that will fall unevenly on schools, and Local Authorities, serving pupils with the greatest needs.
The cuts will continue - unless we organise
The NAO Report does suggest that, based on reported DfE plans, there could finally be real-terms increases in school budgets between 2020-21 and 2022‑23. However, there is every reason to expect that this austerity-minded Government will seek to continue the funding squeeze, particularly given the costs that have fallen on the Treasury as a result of the Covid crisis.
For example, the Report points out how the change in calculating 'pupil premium' allocations, basing them on the preceding October census instead of the January figures, has also meant that "stakeholders have highlighted that ... schools will receive less pupil premium than they would have done, directly affecting disadvantaged pupils".
It's also worth noting that the Report states that "self-generated income has amounted to around £3 billion per year (equivalent to around 7% of core funding)". This again shows how schools are being forced by an "education market" to sell services and rent facilities - rather than being a free resource for their local community.  The pandemic has also left sectors particularly reliant on funding generation, such as Early Years, particularly exposed.
The NAO also cast considerable doubt on the Government's claims that schools have had the funding needed to meet the additional costs of trying to make schools and students "Covid-safe". They point out that "the stakeholders we consulted told us, based on the Education Policy Institute’s work and their own research, that the funding provided by the Department
was insufficient to meet the costs arising from the pandemic".
As it is, it's worth remembering that the UK has some of the largest numbers in school classes globally, especially in primary schools. That is bound to have been a contributory factor to the rate of viral transmission in our schools. It will remain a significant factor in undermining education in future. We need a major investment in education, not just a minor temporary increase in real-terms funding. 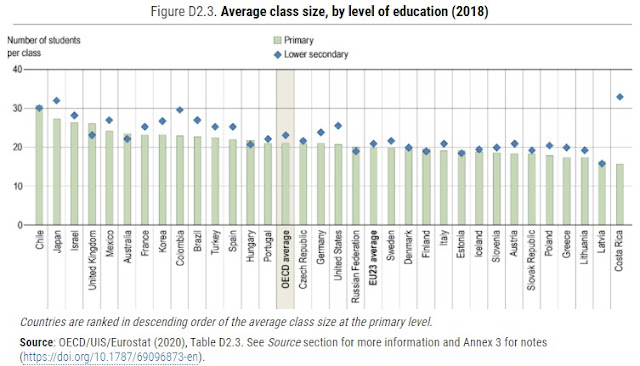 In conclusion, the NAO Report shows again that the issue of school funding is a critical one for the NEU and the parents and students in our school communities. We will need to go out once again to our communities, on stalls and on the school gates, to explain to parents and fellow trade unionists why this Government threatens all of our children's futures - but particularly those with the greatest needs.
Posted by Martin at 15:38