Following a further hustings for NEU members in Wales, held on 23 June, I have been asked to respond to two additional questions. For transparency, I am sharing my responses below.
If you are interested in watching the speeches and responses from all three DGS candidates at the 23 June meetings, the Zoom recording has been posted here: 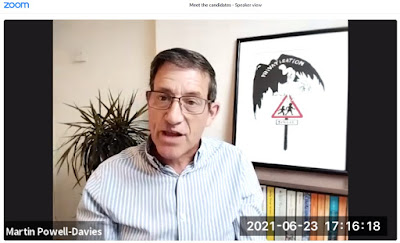 Q: Where do you think Support staff fit into the educational landscape in the future? Do you think that Support staff are viewed differently since the pandemic and not as previously described as "paint pot washers" or "playtime helpers"? Do you feel proud to have support staff stand beside you as members of the NEU?

Answer:
Firstly, I would want every NEU member to strongly challenge any colleague who demonstrates such an insulting attitude to Support Staff colleagues. Support Staff play an essential role in the work of every classroom and every educational institution, as essential a role as all other members of the staff team. Sadly, however, it is these members who suffer the lowest pay-rates, including too often term-time only pay, are pressurised into taking on duties outside their contracted duties, and are often the first to be targeted when schools look to 'restructure' in order to meet the demands of the education cuts being imposed by the Westminster Government.

If anyone doubts the role of support staff, I would draw their attention to the April 2021 Report published by the UCL/Institute of Education about the "unsung heroes of the pandemic". It focussed on the work of TAs, although, of course, support staff posts encompass a much wider range of roles as well.
The UCL report concluded that "our research reveals how essential TAs are to the day-to-day running of schools. This is true in more normal times as well as during a pandemic. If we are to build a more resilient education system going forward, then their voices need to be heard. The unique understanding and clear view of what matters most within their communities, which they have gained from working on the frontline, should be respected and recognised". While this was research funded by Unison, it's a message that should be emphasised across the education unions.

Increasing numbers of support staff members are choosing to join the NEU because they believe we can provide the campaigning strength to represent their needs. I certainly feel proud to have them alongside me, and all colleagues, as members of the NEU. One of the chief strengths of coming together as the NEU is that we could then start to build a stronger, genuinely all-educator Union, bringing together all staff across the workplace. However, as things stand, the TUC Agreement means that we still can’t ‘actively’ recruit support staff – nor are we recognised for collective bargaining purposes at local nor national level.

NEU Conference agreed to instruct the Executive to review this Agreement and, as DGS, I’d want to make sure that was done with urgency. We need to say to our UNISON, GMB and UNITE colleagues that having our voice at the table will strengthen all our hands – and that support staff colleagues need to be able to openly choose the union that they think fights best for them – whichever it is – and that we work jointly as unions to protect education and Support Staff pay, jobs and conditions together.

Finally, their place in the educational landscape of the future depends on how strongly and successfully we can organise that fight. If we are to succeed in delivering our vision of fully-funded, genuinely comprehensive education that meets the needs of every learner, then support staff will very much be part of the future of education.
Support staff will be vital as essential support to learners - and the teacher - in the classroom, as mentors and help to those with specific needs, as lunchtime supervisors, cleaners, catering and office staff and, of course, as staff carrying out a wide range of essential administrative and other functions within the workplace. However, if we fail to do so, then support staff will continue to face low pay, 'job creep' and job cuts.