Prepare action to oppose a damaging increase to the school day

On BBC news this morning, hapless Education Secretary Gavin Williamson confirmed what was already clear to most educators - that he is "enthusiastic" about a permanent extension to the school day. This is a threat that must be taken seriously by the NEU, with plans being made now to oppose it with action if the Tories press ahead with this damaging proposal.

The Government determination to open schools as fully as possible over the last year, despite their role in transmitting Covid, has already made clear that Ministers, and their big business backers, see schooling as a child-care service as much as an educational one.

Of course, even the education they force on young people and schools is a narrow, 'exam factory' education dominated by high-stakes testing and league tables used to grade students, staff and schools in their corporate vision of an education marketplace. What parents and educators must demand is an end to the exam factory schooling, not making the production-line run for an even longer shift every day!

Williamson's comments came during an interview about the announcement of an extra £1.4 billion for what has been described as 'catch-up' tutoring. Of course, what many children needed to 'catch-up' on above all was a chance to play and interact with peers again, with a focus on their broader well-being and mental health, rather than just additional lesson content. However, even to meet that narrower goal, £1.4 billion works out at about £50 per pupil per year - far less than required to provide sufficient additional staffing, one-to-one and small group support (see update below).

But, instead of proper investment in education, this austerity-minded Government thinks it can do better, for cheaper, by simply extending the school day. In their minds, that means getting more for less out of their workforce and more time to 'fill' children with facts. It is also a regime designed to instil the mentality that they - and their parents - need to spend more time at work, and less time together.

Educationally, extending the school day won't help students learn. They, just like the staff teaching them, are exhausted enough at the end of the existing school day, let alone an extended one. Concentration will not be maintained.

I explained in March in a first post responding to Williamson's suggestion of longer schooling that pupils in England already spend longer in school than the global average.

Excessive hours are already driving out too many school staff

School staff, of course, already work far too long as well. As budgets tighten further and posts are cut, remaining support staff are being bullied into taking on roles outside their job description and working additional unpaid overtime.  As for teachers, even the Government's own figures show that they are already working over a 50 hour week. 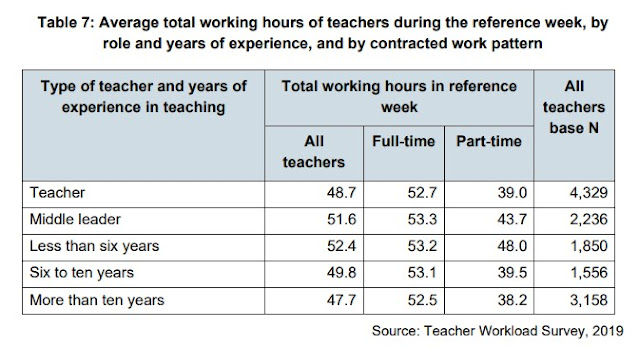 Send a clear warning - we'll take action if you press ahead

The time at the end of the existing school day when ignorant Ministers like Williamson might think teachers are just heading home, is of course time when teachers are desperately trying to 'catch-up' on at least some of their planning and marking. If they now have to continue teaching for longer, that work will now take up even more of their evening and weekends than it does now.

Excessive workload is already the main reason why so many teachers leave the profession - a staggering third of new entrants within the first five years in the job. These plans will drive even more out of teaching - unless we organise to make sure the Tories' plans are dropped and, instead, action taken to reduce, not increase, workload.

Under current contracts with 1265 hours of 'directed time', school employers could not enforce a longer working day. However, the pressure on staff to do so, including the pressure from performance pay, will still be exerted in some schools. School groups will need to organise firmly to make sure workload isn't increased yet further through 'divide-and-rule' amongst staff.

If Williamson and Johnson press further with trying to impose additional working hours, such an attack could not be fought school-by-school alone. That's why all teacher unions must make firmly clear that any attempt to impose changed contracts will be strongly fought together.

What I posted in March is even more the case today - "Unions need to boldly respond with a clear warning that, if the Government tries to enforce worse conditions, we will organise national action to defend staff and education".

UPDATE: 'Recovery Commissioner' resigns - also posted separately here
So, having commissioned Sir Kevan Collins to report on the investment needed to (in their words) "catch-up" after the pandemic, the Treasury have refused to foot the bill of £15bn, instead stumping up less than 10% of what was asked for. That's just £6,000 a year for an average primary school.
In response, Collins has resigned, saying "I do not believe it is credible that a successful recovery can be achieved with a programme of support of this size".
On this, Collins is of course absolutely correct. But it isn't just the funding for 'recovery' that is woefully inadequate. As the NEU and the School Cuts campaign have been arguing for years, education as a whole needs permanent and ongoing investment to make sure the staffing is in place to make sure all needs are met and our large class sizes are reduced.
Expert analysis shows that schools and colleges have suffered from years of real-term spending cuts. Many schools have been announcing further job cuts for the end of this academic year, with support staff posts particularly vulnerable. The pandemic has also hit the Early Years sector particularly hard whilst the critical underfunding of SEND budgets has only got worse.
Is an extended school day the best use of increased funds?
Given our long-standing campaign for increased education spending, it is laughable that Tory Minister Nadhim Zahawi has tried to blame teaching unions for Collins' resignation! Zahawi complains that unions "resisted the idea of extending the school day in the first place". But there's no contradiction between questioning the extension of the school day and demanding proper investment in quality education.
Making tired children sit in class, or with tutors, for even longer days of "catch-up cramming" isn't what's needed. It could even do more harm than good by driving out any love of learning.
And, in practice, the pressure to staff an extra half an hour or so on the day would be on existing teachers and support staff. But, (as discussed above), we are already at breaking point with our existing workload. Proper investment in additional staffing is vitally needed, not cheap-rate tutoring schemes - and that would be best primarily spent on support within the existing school day, rather than in extending it.
First and foremost, class sizes need to be cut. The UK has some of the largest numbers in school classes globally, especially in primary schools:
Cutting class sizes would ensure pupils had more individual attention, and would also reduce teacher workload as well.
Reducing class sizes and increasing in-class support also ensures that children receive support alongside their peers, rather than being withdrawn from them. This is significant because, rather than mistakenly emphasising so-called 'lost learning' against the demands of a fixed curriculum, the main need for "catch-up" for children who have suffered most in the pandemic is their social skills and general well-being. That's because they have had less opportunity to be able to play and interact with their peers.
So, while some additional high quality individual or small group tutoring might also be needed, maximising learning within the whole-class setting has important advantages for learning in a wider sense. There's also a need for schools to be able to provide greater pastoral support, with additional mentors and counsellors as well, particularly to support mental health.
These are decisions that schools should be given the flexibility to decide as best meets their circumstances  but, above all, with the funding necessary to be able to meet those needs.
No to schools operating longer 'exam factory' shifts
If schools are going to offer extended sessions, then they should not be focussed on formal learning but instead offer after-school opportunities for children to interact and play with their peers in a different way. After-school sessions should concentrate on activities such as sport, drama, art and music that many families cannot afford to pay for their children to participate in. Staffing should be recruited additionally, rather than increasing existing staff workload further.
Sadly, Williamson and the Treasury's actions over the last 24 hours confirm that they aren't interested in genuinely investing in the future. Instead they are looking to get by on the cheap by trying to force overworked staff and stressed students to simply work for longer. Together, parents, staff and students must say no - and unions prepare action to oppose any attempt to impose a further worsening of conditions.
Indeed, we should go further and demand the additional investment our schools and colleges need and a new National Contract for all staff that includes trade-union negotiated class size and staffing policies that makes sure there is sufficient staffing in place to meet needs - as well as limiting workload.
Posted by Martin at 09:26