Questions for a DGS candidate from members in Wales

As part of the ongoing nominations stage of the campaign to elect the NEU's first elected Deputy General Secretary, two all-Wales hustings have been organised for NEU Cymru members.
As I explained at the first of those hustings, hosted by Caerphilly NEU on 10 June, the devolution of powers to the Welsh Government presents a somewhat different context for educators in Wales - but also some different opportunities for collective organisation.
Up to now, Wales has managed to avoid the break-up of education into academy chains that has inflicted so much damage in England, and won curriculum changes that at least move closer to putting the needs of children and educational expertise first, rather than the narrowing of the curriculum enforced by SATs in England.
Of course, contradictions remain, and NEU Cymru members will know that for change to be implemented properly, it requires time for training and curriculum development and funding for sufficient staffing and resources.
Therefore, the issue of education funding remains a key one. The Westminster Government announcement of recovery expenditure of just £50 per pupil is clear evidence that they have no intention of investing in children’s futures. In Wales, as the block grant  has fallen, so has education spending fallen - by 6% in real-terms - and there is good reason to fear that Westminster will seek to cut further still.
Therefore, NEU Cymru, alongside the whole of the NEU, is going to need to organise to expose the cuts and the unmet needs of our learners and build a united community campaign to demand the funding that’s needed.
But the fact that education decisions are devolved gives the Union organising avenues that aren’t open in the same way in England. For example, the work done by the Union and its supply activists showed how pressure led to gains on an all-Wales basis with the New Framework Agreement for supply teachers. But, of course, those gains have been limited while agencies continue to ignore those pay rates – and the battle continues to win the direct employment of supply teachers paid according to the STPCD and as part of the TPS.
But, as well as that continued campaign for supply colleagues, I would want to discuss with NEU Cymru members whether a campaign could be fought to win a National Contract for Wales for all education staff. I have long argued that the NEU should bring together they key concerns around pay, working hours and education into one unified campaign for such a new National Contract for all. But, as was achieved in some Local Authorities through winning ‘workload charters’, while building such a campaign on a union-wide basis, we should also look to make gains through individual employers and, through putting pressure on the Welsh Government, across Wales.
Here is a shortened version of my contribution, posted to YouTube:
Here is my A4 leaflet setting out my "Manifesto for Wales" - please download a copy from here. 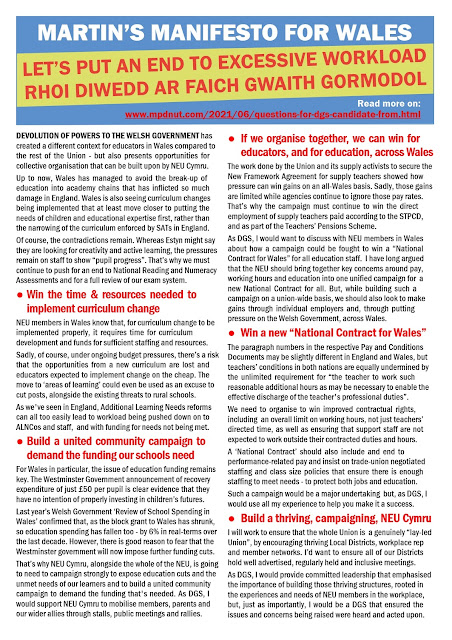 Email ThisBlogThis!Share to TwitterShare to FacebookShare to Pinterest
Labels: Cymru