This morning, an important open letter signed by scientists and campaigners has been published by the British Medical Journal. It raises serious scientific and ethical concerns about the trials being conducted in some schools on the use of Daily Contact Testing as an alternative to isolation of contacts of cases. I share those concerns, and have signed the letter.

As part of my campaign to be the first elected Deputy General Secretary of the NEU, I have made clear that I will speak up when I think a different perspective is needed. I would not expect this to be one of those occasions. However, to my surprise, the letter has not been signed officially by the NEU, nor other trade unions.

For all the reasons outlined in the letter, not least the greater transmissibility of the now dominant delta variant and the questionable accuracy of Lateral Flow Testing, I hope that education unions will make clear that they share the concerns raised today.

The health and safety of staff, students and their families will be at risk if the DfE presses ahead and uses these flawed trials as justification to adopt Daily Contact Testing as an alternative to isolation across schools and colleges as a whole.

Educators and their trade unions should be insisting that, instead, the necessary mitigations needed to reduce transmission in schools, as well as the educational disruption that results from outbreaks, are in place. This should including supporting those who have to isolate - both financially and educationally - when that is needed to reduce further transmission within schools and their communities. 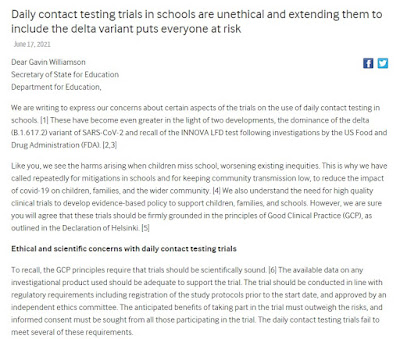 The full text of the letter can be found on the BMJ blog here:
A summary of the issues raised, as set out in the press release from the BMJ, is posted below:
"Daily contact testing trials in schools are unethical, and extending them to include the delta variant puts everyone at risk, warn experts in The BMJ today.
In an open letter to Gavin Williamson, UK Secretary of State for Education, a large group of healthcare professionals, scientists, educational bodies, parents, and caregivers call on the government to suspend these trials immediately, saying "the risks and potential consequences are very serious."
They welcome the principle of conducting research to reduce school absences associated with covid-19, and understand the appeal of a study evaluating the effectiveness of regular lateral flow testing in schools as an alternative to 10-day isolation for contacts of cases.
But they argue that these trials fail to meet several requirements in good clinical practice guidelines, such as sufficient information about how the trials are carried out, and what would happen should there be any significant safety concerns.
They outline several concerns including:
* risks due to missed infections by lateral flow tests in schools
* inadequate informed consent
* lack of consideration and communication of possible harms
* additional risks to children, staff and families posed by the spread of the delta variant
* lack of robust mitigations (masks, ventilation, smaller bubbles, outdoor learning) in schools
These concerns have become even greater in the light of the dominance of the delta variant and recall of the INNOVA lateral flow test following investigations by the US Food and Drug Administration (FDA), they explain.
"In light of the above, we ask the Department of Health and Social Care (DHSC) to suspend these trials immediately, pending adoption of comprehensive mitigations and to allow time to prepare and provide vital clarity to students, families, teachers, the wider public and the scientific community about the scientific justification and ethical considerations for these trials," they write.
"We would be very concerned about results from these trials being used as the basis for any public health policy, given the assessment of risk of increased transmission arising from these trials is inadequate."
They add: "It is deeply concerning that the daily contact testing trials are being presented as a solution for educational disruption when so little has been done in the way of basic and highly effective mitigations that would help reduce educational disruption, and investment in catch-up learning to address inequities created by this."
"Keeping potentially infected and infectious children and staff in school may make attendance numbers look better for the short term, but the risks and potential consequences are very serious," they conclude.
Posted by Martin at 09:33