Schools and Covid: Government needs to act to reduce risk, not ignore it.

The summer school holidays are providing a much needed break for staff and students alike from the stressful conditions of teaching and learning in the midst of a pandemic. The fact that school communities, not least unvaccinated young people, are no longer closely mixing in poorly ventilated classroom spaces, is also likely to be a significant factor in the drop in reported Covid cases over the last fortnight.

But the current prevalence of the Covid virus, even without any new variants developing, remains a serious threat to health. While vaccination of much of the UK's older population has certainly helped reduce the risk of death, a proportion of a diverse population will inevitably still face hospitalisation, particularly those who have existing conditions that leave them at greater risk. Many more again will join the hundreds of thousands already reported in the Government's own data as suffering from the debilitating effects of "Long Covid" many months after their likely date of original infection.

A Government that was serious about protecting communities, and to stop the disruption to lives and livelihoods caused when outbreaks occur, would be taking the opportunity offered by the school holidays to make sure measures were in place to reduce the airborne spread of the virus in schools at the start of the new academic year.

For example, they could be following the example of New York, where "to help curb the spread of COVID, all 56,000 New York City public school classrooms will be equipped with two air purifiers by September" ... "In addition, custodians have been given monitors to measure carbon dioxide levels, an indicator of how much fresh air is circulating". They could also extend the vaccination program to children over 12, for whom the Pfizer-BioNTech vaccine has been authorised for use.

Instead of acting to reduce risk, the Conservative Government is removing what limited mitigations have been in place in schools. In May, they removed the requirement for face coverings in secondary classrooms. They have now said that there will no longer be any requirement to teach pupils in consistent 'bubbles', and that pupils will no longer be required to self-isolate if they are 'close contacts' of a positive COVID-19 case.

Of course, especially when the levels of infections and school outbreaks were as high as they were at the end of last term, isolation requirements have severely disrupted education. However, the steps taken by schools will also have helped contribute to the fall in infection rates now being seen:

Removing isolation requirements alongside other protective steps in schools won't prevent disruption to education when outbreaks inevitably occur. Instead, they risk making those outbreaks more likely, accelerating the spread of infection, and put at risk the falls in infection rates that will hopefully be sustained over the summer. These rash steps will also endanger the health of students, staff and the wider school community, particularly those medically at the greatest risk.

Instead of demanding Ministers invest in ventilation measures in our schools, or exposing their failure to provide workers with full pay when they have to isolate, or the ongoing lack of  properly functioning community test-and-trace schemes, sadly Labour leader Keir Starmer seems more interested in criticising Ministers for not acting fast enough to remove measures that can help protect against Covid transmission.

Once again, the responsibility will fall on school unions to use our collective strength to defend health and safety. We will need to insist that risk assessments are in place that ensure a safe environment for staff and the students we teach. If those steps are not in place then, once again, unions must advise members accordingly not to work in an unsafe environment.

As an addendum to my post, I am posting some of the key slides taken from the analysis from this week's briefing  by Professor Christina Pagel on behalf of independent SAGE:

1) Yes, vaccination has made a massive difference: 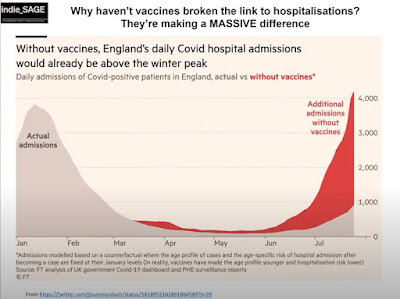 2) But we are still far from having a fully vaccinated population, especially when around 20% of the population are children: 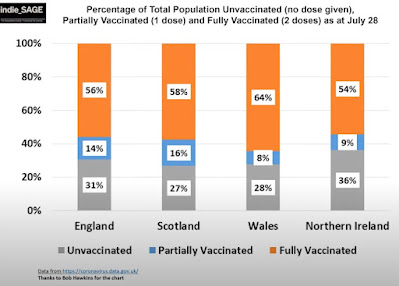 3) Vaccination greatly reduces the risk of death and hospitalisation - but doesn't eliminate the risk entirely: 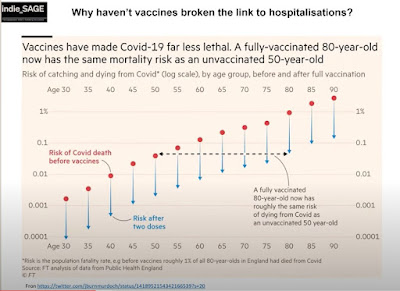 4) Encouragingly, the reported numbers of cases is falling - with one cause of the more prolonged decline in Scotland likely to be their earlier start to the school holidays: 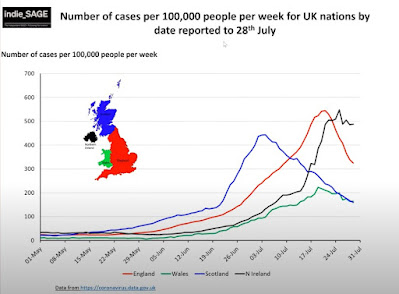 5) However, although this PCR based survey can show a lag behind reported infections, the latest ONS Infection Survey does not yet confirm any overall decline in England, with rates still rising amongst younger unvaccinated age groups in particular: 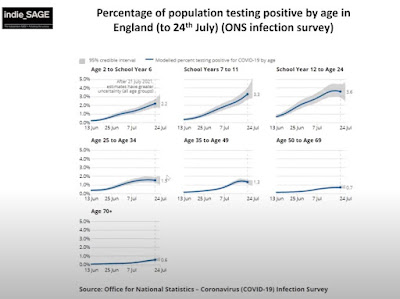 6) Another factor in increasing rates in June/July may have been mixing - particularly of young men - during the Euros: 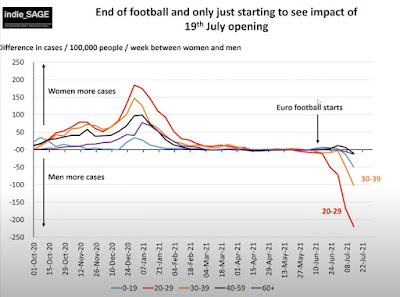 7) There is a danger that the further lifting of restrictions may cut across the gains made from schools being on holiday. However, surveys show that most people are cautious and appreciate that risks remain. It is Government failures that are to blame, not the public: 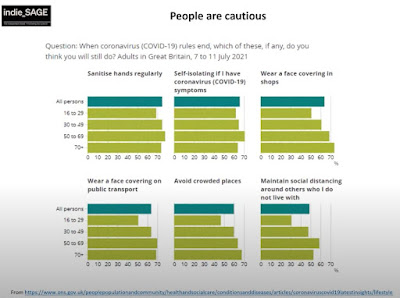 UPDATE: I was able to make many of these points - and more besides (!) - as a guest on this week's "Safe Education for All" broadcast on 'Socialist Telly'. Have a look here: