700 march against cuts in Lewisham

The rain could do nothing to dampen the spirits of the hundreds of trade unionists, teachers, parents, kids, health and library campaigners (and many more!) who gathered outside the Town Hall in Catford for today's 'Lewisham Carnival Against Cuts'. 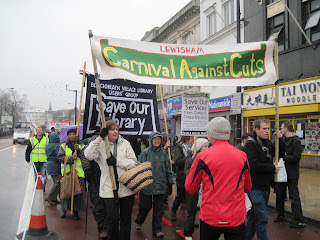 The turnout was excellent - estimates vary but it must have been a good 700 protestors on the march to Lewisham - past the Town Hall (where the Labour Mayor and Cabinet agreed millions of pounds in cuts last Thursday), past Rushey Green Early Years Centre where parents face a 43% rise in childcare fees and workers face redundancy or privatisation, past Lewisham Hospital threatened by the Con-Dem's NHS plans, up Lewisham High Street past 'Opening Doors' (the Employment Advice Centre closed down by the Council just as it throws hundreds more out of work), to finish with a closing rally.

The turnout from NUT members was fantastic, supported by many mums and their kids protesting against Early Years cuts. Christ the King College NUT group had even made a fantastic new banner for the day - ready to take out again on March 26th (if not before!). 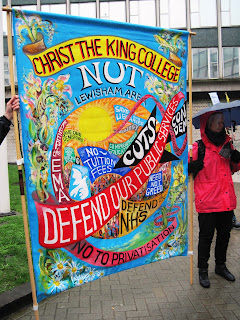 Labour Councillors were conspicuous by their absence. Perhaps they'd heard that Lewisham Anti Cuts Alliance had prepared "Cuts Hypocrite"  spotter cards to alert marchers to the presence of any councillors who pretend to oppose cuts - then vote for them in the Council Chamber. Everyone there was clear - the Con-Dems had to be beaten - but Lewisham Labour Council should be joining with us in fighting the cuts, not carrying out their dirty work.

The only councillors I spotted had been out canvassing in Bellingham, where a council election has just been called for 24 March. You had to see the looks on their faces as Ian Page, the Socialist Party/Lewisham People Before Profit anti-cuts candidate, walked past them leading a group of working-class mums and their kids with placards down to the Town Hall to join the Carnival! 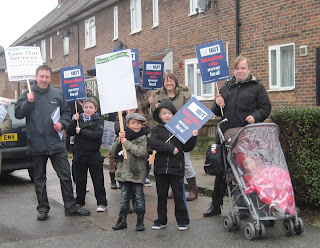 I was given a few minutes at the closing rally to explain the attacks on education and, to cheers, to explain that the NUT was looking to ballot its members for strike action against the Early Years cuts. Like other speakers, I called on everyone present to be out again on the TUC demonstration on March 26th - but not to leave it there. The fight has to continue - and public sector trade unions must take things to a new level by balloting for a one-day public sector strike to defend pensions, jobs and services against the cuts. 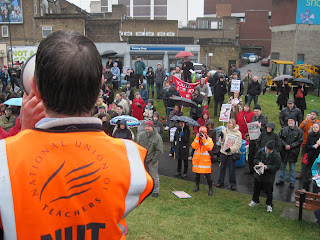 Video from East London Lines
More footage of the Carnival Against Cuts
and more - a longer video of the event
Posted by Martin at 18:58

Looks like a great event, well done, we need to leave them nowhere to hide - another good march in Bristol yesterday - http://bristolsocialism.blogspot.com/