My local library in Sydenham is one of the many threatened around the country with closure as Lewisham Council looks to make £87M of cuts over the next four years.

That's why my family were one of many taking part in library 'read-ins' today to protest against the destruction of our public services. 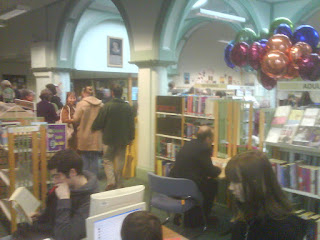 Five libraries are threatened in Lewisham alone in this year's cuts - along with Lewisham's 19 Children's Centres. But, directly looking to David 'multiculturalism has failed' Cameron's Big Society ideas, some Labour councillors hope that they can make cuts, but keep the services, by getting volunteers to take them on, instead of the Council.

But volunteers are no substitute for trained librarians and early years staff. Voluntary organisations - or other, perhaps less philanthropic, businesses - shouldn't be taking over our services. It will inevitably mean worse services, higher charges, job cuts and a loss of qualified staff.

There's no shortcut to fighting the cuts. Instead, Labour councillors should be joining with trade unions and communities in building a mass campaign to demand the Government reverses the cuts. The bankers should take their losses; local communities shouldn't pay for them.

Lewisham unions and campaign groups are organising a 'Carnival Against Cuts' on February 19, culiminating in a march from Catford Town Hall to Lewisham. Lewisham NUT are also consulting with members about whether we should ballot for strike action across the borough to oppose education cuts - just as Camden and Tower Hamlets NUT are doing.
Posted by Martin at 18:02