Austerity and Anger in Greece 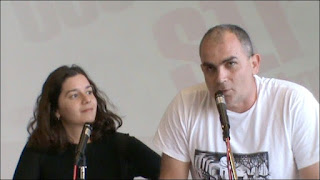 Apostolis Kasimeris, one of the leaders of the OASA bus workers’ union in Athens, gave this speech to the National Shop Stewards Network Conference in London on June 11 2011:

Working people understand the treacherous role of the Greek TUC leadership and are boiling with anger. Last year, on the day of a general strike, the TUC leader Panagopoulos tried to make a speech at the workers’ rally but was physically attacked by strikers. He was chased through the crowds, but no trade unionist stepped in to defend him. Since then, he has only been seen in public accompanied by six bodyguards.
It isn’t just that the trade union leaders don’t respond to the needs of the situation – it is also that they systematically sabotage the development of the struggles.
Take the example of my Union, the Bus Workers’ Union of Athens and Piraeus, which has about 6,000 members. When the government began its attack against us last December, the leadership of the Union, under the control of PASOK and ND, tried to justify why they were not calling for militant strike action. Their excuse was to blame workers, saying that they were not willing to fight.
But, when the brutal cuts were announced, they were forced to call for strike action so as not to be completely exposed. Strike action took place over a period of about 3 months. But the leadership was not really determined, there was no plan of action, no escalation, and above all there was absolutely no attempt to coordinate the struggle with other sections of the wider public sector that were also under attack.
Towards the end of February, the majority in the leadership decided that it was time to call off the action. They launched a blatant coup d’état against the Union. They refused to call executive committee meetings, they refused to go the meetings called by other members of the Union executive, and they hid, so that a mass-meeting of the bus-workers would not be called. They knew that if it had been, it would have voted in favour of continuing the struggle.
They then went ahead with a fake ‘referendum’ planned to formalise the decision to stop the strikes. It wasn’t only against the Unions’ constitution, it was also against the law, since they forged the signatures of other members of the Executive Committee, in order to achieve the necessary majority required to call a referendum. All this was done in order to disappoint, to demoralise, to break the will of the bus workers to fight.
There had been three months of struggle. Our action inevitably caused a lot of disruption to the people of Athens and Piraeus who used public transport. But, despite this, they were on our side. Right up to the end of our dispute, 60% of people were in favour of the strike, despite all the massive government propaganda conducted through the mass media. They tried to present the bus workers as evil people determined to make ordinary people suffer so as not to lose our privileges. The public support showed their understanding of the situation and their class solidarity.
For these Trade Union leaders there is only one word: traitors. If my sector had been the only sector which had been sabotaged and betrayed, the damage would not be too great. But this is what they do everywhere.
Despite defeats like ours, the Greek working class will continue to fight. It has no other choice because the attacks that we face will continue and they will be immense.

The last development in the struggles of Greek society has been the movement of the “enraged”. They have followed the example of the Spanish ‘Indignados’ and inspired by the revolutions in the Arab world. Last Sunday, without any exaggeration, 500,000 assembled in the central square in Athens. This was perhaps the biggest gathering of people since 1981.
Greek society is at boiling-point. But in order for this anger to find a way forward and for our struggles to win, we have to do everything we can to rebuild our Trade Union movement.
Trade union organisations must pass into the hands of the rank and file. To be democratically controlled by the membership, the struggles must be in the hands of the movement itself.
At the same time we need to rebuild the political organisations of the working class, because today’s mass left parties have lost the plot. They have shown themselves to be absolutely and entirely inadequate for the tasks of this period. This is one of the reasons why in the most recent polls abstention has reached the unprecedented level for Greece of 50.9%, with support for the mass left parties stagnant.
These are the tasks that we have ahead of us. For these we shall fight in the next period with all our strength.
But there is another task that we must never forget. This is internationalism. This is not a struggle of the Greeks alone, but also of the Portuguese, the Spanish, the Irish, the British and more, because we are all being attacked at the same time.
All over Europe, big capital is united against us, but the working class is not able to put up a united resistance. This is the fault of the leadership. Our strength is immense but it is not put into action. We have to make sure that workers begin to realise their strength and fight together, in united struggles, across the continent.
Let me finish with a message of solidarity for all those taking action on June 30. Get out on the picket lines, on the streets and demonstrations, and show Cameron that, united in action, working people will defeat their attacks.
Posted by Martin at 14:42