June 30 - Striking and Marching to Demand Fair Pensions for All

The streams of people turned to rivers, and the rivers turned into a flood as delegations of striking trade unionists from all four corners of London converged on Lincoln's Inn Fields for today's London demonstration against pension robbery. 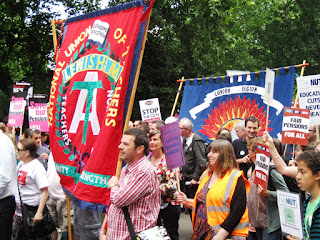 Many had already come from local rallies and picket lines in their own boroughs. There were ten different picket lines outside Lewisham schools and several PCS and UCU pickets as well. £155 for our hardship fund was collected from the picket line outside Crossways Sixth Form! We got our message out early to London via a live interview for LBC radio from the picket line at St.Matthews Academy.

From there, NUT members made their way to Lewisham Town Hall and then up to Charing Cross before marching over to an already packed Lincoln's Inn Fields. There, Paul, a teaching colleague in my own school in Catford, put over our case to Al-Jazeera - just as so many other teachers were able to clearly explain why they weren't prepared to pay more, to work longer and then get less pension. http://english.aljazeera.net/video/europe/2011/06/201163092012758854.html 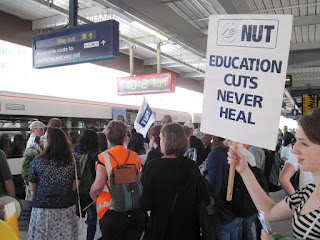 The demonstration was good-humoured but determined, whistling and chanting as we made our way slowly through the sunshine of Central London. "What do we want - a decent pension - When do we want it - Before we die!" seemed to go down best with the young teachers on the considerable delegation behind the Lewisham NUT banner! 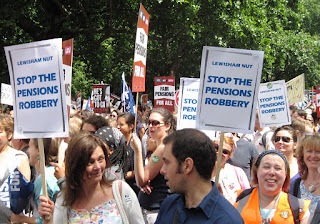 The turnout was two or three times greater than we were expecting - around 20,000 PCS, ATL, UCU and, above all, NUT members marched down Whitehall to the Rally at Westminster Central Hall.

Reports from Lewisham NUT members that managed to make it into Central Hall spoke of an electric atmosphere at the closing Rally addressed by the General Secretaries of all four striking unions. Both in London - and at the dozens of rallies across England and Wales - the unions jointly launched a Fair Pensions for All Petition demanding that all workers and pensioners have dignity and decent living standards in retirement. 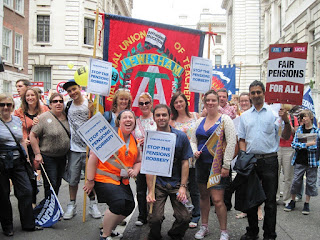 I was asked to speak at the overflow rally outside Central Hall to address the many marchers that could not make it inside the hall. Before I spoke, a Lewisham UNISON member and Teaching Assistant explained that he had joined the rally today to show his support. To cheers, he added that, in the Autumn, UNISON and other school staff unions must all be on strike together. 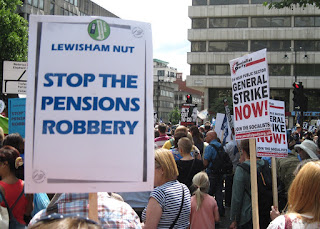 I asked the marchers to "Look around and feel your strength. This Government may have thought they were going to get away with their cuts but now they know that the trade unions are on the march. They tried to claim that 40% was a low turnout for a ballot - but teachers have voted with their feet today with 80-90% of schools closed or partially closed across London".

"The press try to claim we haven't got public support but the response from parents and drivers passing our picket lines has been excellent. People want to see someone standing up to this Government's cuts at last - and that's what they see us doing today".

"In 2005-6 the threat of united action forced the last Government to retreat over pensions attacks. We can do the same in 2011. If we strike together, then we can win together"