A packed hall at the South Camden Community School saw over 300 stewards and workplace reps from unions and workplaces across Britain gather for the fifth annual conference of the National Shop Stewards Network. 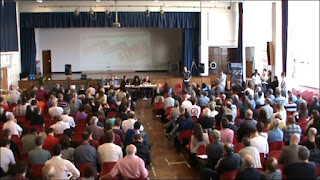 As I was able to say in my contribution in the opening session on the pensions battle, the hall may be full today but on June 30th, like thousands more schools, it will be empty if teachers , civil servants and lecturers walk out in united strike action.

The afternoon session heard from some of the blacklisted workers in the rail and construction industries and the battles to stop employers attacking trade union organisation.

The day finished with a rousing contribution from a Greek bus workers' leader who spelt out exactly the cost to working people when the IMF and EU demand 'austerity'. In the last two years, public sector wages have been cut by 30% on average - and the plans are to reduce them by a further 35% over the next two years! A teacher, perhaps already earning only 1300 euros a month before the cuts, would now only take home about 1000 euros.

Already the crisis in Greek state schools means that most parents have to find money to pay for their children to attend private 'frontistiria' for extra lessons. Typically, this might cost a family 500 euros a month out of their declining wages.

The retirement age is already 67 - but to get a full pension, a teacher would have to work on until their seventies. One of the engineers in his bus garage is still having to work at 78. As I said in my speech, if the Con-Dems get away with the same attacks here, classes will have to wait until the teachers' stair-lift has reached the end of the corridor!

But the message from the Conference was clear - we are not going to allow the Con-Dem Government to take away everything that we have won over decades - whether it be pensions, jobs, the NHS, or trade union rights. June 30th will be another important step forward in building united opposition to their savage cuts.
Posted by Martin at 09:29