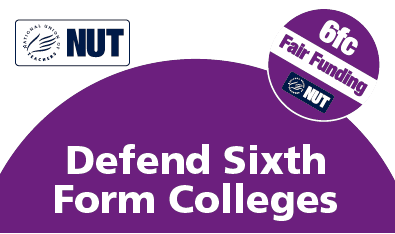 NUT members in sixth form colleges across London are taking strike action this afternoon as the start of a campaign of action to oppose Government's cuts in college funding and their effect on teachers' pay and working conditions.

This action follows a successful national ballot of NUT members in sixth form colleges. We hope we could soon be joined by other unions in a further national day of action since ATL members are now also being balloted for strike action and NASUWT members are also being consulted on whether they wish to take action.

NUT members have campaigned effectively over the past year, drawing attention to the scale of the Government's post 16 cuts - which have hit colleges even harder than schools - and defending the EMA.

The Government, however, continues its funding cuts and these will be even greater next year. In turn, college employers have increased class sizes and teaching hours, begun to cut jobs and refused any pay increase for 2011-12.
This action is essential to defend teachers, students and sixth form colleges. Sixth Form College staff are to be congratulated for highlighting the cuts that are hitting all schools, but particularly the post-16 sector.
Posted by Martin at 11:15