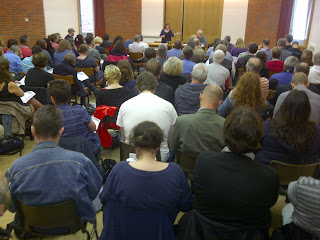 Over 100 delegates representing over 30 NUT Local Associations gathered at the ‘Local Associations for National Action Conference’ in Liverpool on June 16 to discuss how to build national action to defend pensions, pay and conditions.

At the conclusion of a day of democratic debate and discussion, the following amended statement was agreed unanimously, formally setting up the 'Local Associations Network':

This conference agrees to maintain and build a network of local associations and school reps that will enable teacher trade unionists to exchange information, debate and discuss strategy to defeat the serious attacks we face, call on our National Unions to implement such a strategy, and organise solidarity between local and national struggles with the following aims:

1. Continue to work at every level in the NUT for the earliest possible return to collective industrial action in opposition to the attacks on pensions and for a calendar of action that can secure further concessions from this weakened Government. This must involve an escalating program of national action, starting from as early as possible in the autumn term, and continuing beyond, including strike action of more than one day's duration. The NUT should call on other teaching and non-teaching unions to join with us in setting that calendar of joint action.

2. Develop a fightback on workload, capability and abuse of classroom observations at school, local and national level based on collective action by members, including both strike and non-strike sanctions, non-cooperation, defined limits to workload demands and spreading success.

3. Identify, develop and spread the best examples of effective, confident organisation in the workplace which can deliver action, involve members and breakdown divisions between school unions, and build solidarity with associations, school groups and other unions taking action.

4. Welcome and seek to maximise the potential of the national joint declaration of intent between the NUT and NASUWT on action to defend pensions & jobs, and to fight excessive workload, local and performance pay, starting by making every effort to win the national NUT ballot this term with as large a majority and turnout as possible. Establish association campaign committees. Organise as many school meetings as possible, preferably with the NASUWT, to build for the ballot and endorse the Agreement.

5. Work to ensure that the joint NUT/NASUWT initiative:

(c) leads to the development of rank and file links between the NUT and NASUWT including across schools.

(d) is not used to justify further unnecessary delay in taking action alongside other trade unions seeking to build co-ordinated strike action.

6. Congratulate London associations on organising the lobby of the DfE on 10th May. Commit ourselves to organise similar actions in our areas, if possible with local NASUWT branches. Build the joint NUT/NASUWT demonstrations in Sheffield and Oxford on July 14.

7. Fight to have these priorities endorsed and prioritised by the national union and every NUT association.

From this Conference, we propose that:

a. We agree to set up a ‘Local Associations Network’ from today’s Conference that:

i) Hosts a website to publicise the network’s aims, to share materials that can be used in schools and associations to build local and national campaigns, and to inform teacher trade unionists about the latest developments in union campaigns, decisions and debates on the National Executive, and about actions being taken by teacher trade unionists and other public sector unions. [The website has been set up as www.nutlan.org.uk].

ii) is co-ordinated by a Steering Committee elected at today’s Conference. In electing the committee, the conference must ensure that the steering group is not dominated by any particular geographical area or political viewpoint but is inclusive to the range of associations supporting the aims of the network (* see footnote).

iii) produces a report of the discussion and decisions at today’s Conference to be distributed as widely as possible and certainly by associations sponsoring the Conference.

b. We publicise the concrete actions suggested at today’s Conference including:

v) Calling on school groups and associations to lobby their NUT Executive members by sending letters and motions calling on them to vote for national strike action to be held as soon as possible next term, such strikes to be co-ordinated with unions who are willing to take action, such as PCS and the NASUWT, wherever possible but not tied to such joint actions alone.

vi) Inviting Executive members to Association and school group meetings to explain the position they have taken and to listen to the views of members in schools.

c. We convene a further Local Associations Conference next term to review progress made in both revitalising the pensions campaign - and in building effective action to tackle the other attacks facing teachers and education - and to discuss our next steps.

* It was agreed that this proposal would best be met by agreeing that each Association that agrees to affiliate to the Local Associations Network and supports the Network's aims is entitled to one representative on the Steering Committee, to be decided by that Local Association, and that the first meeting of the Committee should be in early September.

As agreed unanimously (with amendments) by LANAC Conference on June 16 2012.
Posted by Martin at 12:26