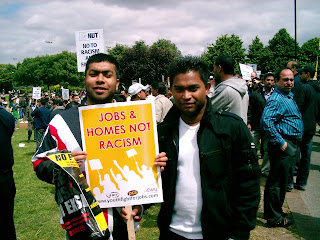 It was always inevitable that the BNP would try to build support on the back of the Woolwich killing. However, rather than demonstrating in Woolwich on Saturday as it was first thought (and a UAF anti-racist festival/demo will be going ahead at 12 noon in General Gordon Square, Woolwich), the BNP have now announced that they now plan to march (or take cars) away from Woolwich and converge on the Lewisham Islamic Centre (which is close to Lewisham Hospital) instead.

In these circumstances, Lewisham trade unionists clearly have a responsibility to organise a protest to make clear to the BNP that their racist lies will not be allowed to divide our community - and also to offer solidarity to the Islamic Centre.  The Islamic Centre has also called on support from a range of organisations for coordinating a peaceful rally against the BNP on the day of the march.

Final details have now been confirmed for a unity rally outside the mosque:
2 pm outside Lewisham Islamic Centre
365 Lewisham High St, by the Shell Garage near the Hospital

The text from the Lewisham NUT leaflet is written below. It can be downloaded from:
http://local.teachers.org.uk/templates/asset-relay.cfm?frmAssetFileID=10834


Don’t let the racists divide us!

The horrific murder of a young soldier in Woolwich has rightly been met with overwhelming condemnation. However, now the British National Party (BNP) are trying to use the understandable outrage at this attack to gain support. On Saturday afternoon, they are planning to march on the Islamic Centre in Lewisham. Lewisham has a proud record of standing united against all those who would divide our community. Join the protest to show the BNP that the trade unions, residents and young people of Lewisham are standing united against this provocative march.

Lewisham National Union of Teachers (NUT) utterly condemns the killing of the soldier Lee Rigby in Woolwich. This was an appalling tragedy for the victim, his family and friends. Local residents showed great bravery in intervening to try and assist him.
However, the racist attacks in the days that followed must also be condemned. Amongst other attacks, three petrol bombs were thrown at a mosque in Grimsby and a fried chicken shop was smashed up in east London. These actions, just like the killing in Woolwich, are carried out by a tiny number of people who are totally unrepresentative of most people.
Racist organisations like the BNP and their ilk are trying to feed off the desperate conditions of poverty and hopelessness that exist in parts of Breadline Britain. When food banks can't keep up with demand, when there’s a shortage of decent homes and school places for our youngsters, then the BNP’s racist lies can seem to provide easy answers. But BNP hatred provides no way forward.
In fact their divisive racism can only set back the struggle against poverty. Racism weakens the force in society that has the potential to defeat government cuts - the power that comes from a united struggle of working people, of all backgrounds. That’s why the NUT, along with other trade unions, organises to oppose the BNP but also to build united  action to oppose privatisation and cuts to schools, hospitals and other public services.
Lewisham has a proud tradition of standing up to fascism and racism. We need to show that unity again this Saturday. As the Lewisham Islamic Centre has rightly said, “the purpose of the march to conclude in our Borough and outside our Centre is to create discord, division and disunity”.
We must not let the BNP succeed in building support out of this tragedy. Let’s stand together and show the BNP that we will not let racism - or terrorism - divide our community.
Posted by Martin at 21:41