Solidarity to teachers striking in Berlin and Greece 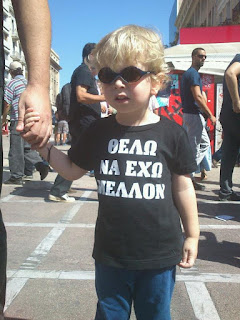 As the EU and the 'Troika' try to force even more poverty and repression onto the backs of the working-people of Europe, teaching unions are being forced into action to defend their conditions - and to defend education and public services from vicious cuts and privatisation.

Next week, teachers in Berlin and Greece will both be on strike.

In Greece, solidarity messages should urgently been sent to OLME, the secondary teachers' union on olme@otenet.gr. Facebook support can also be posted on https://www.facebook.com/oxistinepistrateush

This support is urgently needed following the Government's provocative decision to announce, just a couple of days before the (Orthodox) Easter Holidays, attacks which include increased class sizes, pay and job cuts, school mergers,  increased workload and the issuing of short-term contracts.

These announcements were deliberately timed just before students start their exams, a calculated attempt to attack teachers at the most difficult time in which to combat the attacks. OLME, correctly, nevertheless has called its members on strike, despite a well-prepared torrent of attacks now being piled on he teachers by the Government and its press.


" If their plans are implemented in the next year:

Worse, the Government, as with previous disputes of transport workers, has resorted to using draconian 'wartime' legislation to ban the strikes and to try and  force teachers to report to work.

14.5.13: Also see this UPDATED APPEAL FOR SUPPORT from OLME on the Teacher Solidarity website: http://www.teachersolidarity.com/blog/call-for-international-solidarity-from-greek-teachers-union

Here is a message that I have sent to OLME tonight:

Please accept this message of support at a time when your members face a vicious attack from a Government carrying out the dictats of the Troika in order to pile further misery on the youth and workers of Greece.

The Government has deliberately chosen the time before the holidays and before the exams to attack you. Now they want to bully you with 'mobilization' orders as well.

You have no choice but to fight - and you are right to fight. I am sure that, if you go out and campaign amongst the working-people of Greece, among your students, their families and neighbours, that they will recognise why they must support your fight against cuts to your pay, jobs and working conditions - and to cuts to their schools and their children's learning conditions.

In Berlin, as explained on the teachersolidarity website:  http://www.teachersolidarity.com/blog/berlin-teachers-to-strike-next-week, members of the GEW union are taking part in a series of strikes, escalating action which has been taking place throughout 2013.

Messages of support can be sent to the teachers via the young teachers' section on: junge.gew@gmail.com

Here is the message I have sent to Berlin:
"I am writing as a National Executive member of the National Union of Teachers in London, with a message of solidarity to fellow teachers taking strike action in Berlin next week.


Internationally, education is under attack and, internationally, teacher trade unionists must publicise and support each others' struggles. I have been notified of your dispute through SAV teachers and have brought your struggle to the attention of other members of the NUT National Executive.


In England and Wales, as in Germany, teachers’ pay and conditions are under threat as neo-liberal politicians seek to make savings at our expense – and at the expense of the young people that we teach. We must use our collective strength to defend our livelihoods and explain to parents and students that our struggles are also a struggle to defend education as a whole. As the successful struggles in Chicago showed, building support in the community for teachers’ action will be an important component of our struggles too.


NUT members, together with members of the NASUWT teaching union, are starting roiling regional strike action this term in opposition to UK Government plans to introduce pay cuts through performance-related pay and to further increase our working hours.  Our action will continue after the summer holiday, extending to national strike action before Christmas. I hope your regional action in Berlin can also be a springboard to the national strike action that can best put pressure on the employers to meet your justified demands.


Congratulations on the stand you are taking next week.


From London to Berlin, solidarity!"

Thanks, comrade! Solidarity from Berlin to London as well!
Christoph