We are writing to you to ask that you put forward Martin Powell-Davies, our Lewisham NUT Secretary, as one of your two nominations for the election for NUT Vice-President that will take place in the autumn.

These are just some of the reasons why we believe Martin should be elected to this post:

Teachers and education are under severe attack. This Government is determined to drive through its cuts to pay, pensions and conditions so as to cut the cost of education. It wants to stop unions leading communities in a successful campaign to oppose its attacks on state education.

Faced with these threats, we need National Officers who will provide bold leadership and a clear strategy. As a respected Divisional Secretary and Joint Union Secretary for the last twenty years, Martin has shown that he has the skills, ideas and experience needed to take on such a key role.

The failure to take national strike action since 2011 has raised doubts amongst teachers as to whether the NUT is prepared to mount a serious struggle. Our pensions have worsened, a new STPCD has been imposed to accelerate performance-related pay, and now national conditions are under threat too.

As a member of the National Executive for the last three years, Martin has consistently argued that the Union has a responsibility to give a lead and call national strike action. Conference eventually voted against the proposal that our joint calendar of action start this term with a national strike. Martin helped lead that call but is now strongly campaigning for the action that has been agreed.

Martin is working closely with other unions to campaign for adoption of the NUT/NASUWT pay policy. However, Martin understands that school-by-school action will not be enough and that 27 June must also just be the start of escalating action. As part of his campaign, Martin will be calling for the promised programme of ongoing action to be put firmly in place, and continue into 2014.

As NUT Secretary, as well as still being a practising science teacher, Martin understands the pressures facing NUT members – and officers. He knows the relentless workload we face, made worse by imposed targets and nit-picking observations. That’s why, as a NUT Conference delegate since 1990, Martin has consistently and correctly argued for action to be taken on workload.

Whilst others have doubted the willingness of teachers to struggle, Martin has understood that, given those pressures, teachers will respond positively to a clear lead. As National Officer, Martin would help Associations to encourage and explain to members why we need to act boldly together.

Martin has already received the backing of the Local Associations National Action Campaign (LANAC) to stand in this election. After debate, his candidature was proposed and overwhelmingly endorsed at a LANAC Committee attended by delegates from 26 different Local NUT Associations.

We hope you can also endorse Martin’s candidature and nominate him from your Association. 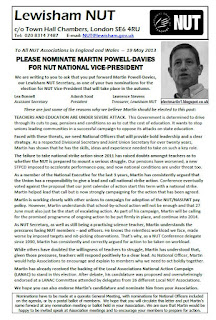