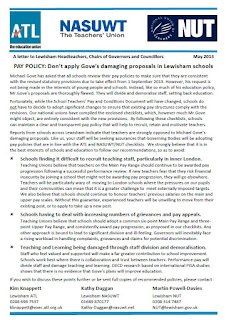 The following joint letter is being sent to all Lewisham Headteachers, Chairs of Governors and Councillors from the secretaries of Lewisham ATL, NASUWT and NUT.

Michael Gove has asked that all schools review their pay policies to make sure that they are consistent with the revised statutory provisions due to take effect from 1 September 2013. However, his request is not being made in the interests of young people and schools. Instead, like so much of his education policy, Mr.Gove’s proposals are thoroughly flawed. They will divide and demoralise staff, setting back education.

Fortunately, while the School Teachers’ Pay and Conditions Document will have changed, schools do not have to decide to adopt significant changes to ensure that existing pay structures comply with the revisions. Our national unions have compiled the enclosed checklists, which, however much Mr.Gove might object, are entirely consistent with the new provisions. By following these checklists, schools can maintain a clear and transparent pay policy that will help to recruit, retain and motivate teachers.

Reports from schools across Lewisham indicate that teachers are strongly opposed to Michael Gove’s damaging proposals. Like us, your staff will be seeking assurances that Governing Bodies will be adopting pay policies that are in line with the ATL and NASUWT/NUT checklists. We strongly believe that it is in the best interests of schools and education to follow our recommendations, so as to avoid:
Teaching Unions believe that teachers on the Main Pay Range should continue to be awarded pay progression following a successful performance review. If new teachers fear that they risk financial insecurity by joining a school that might not be awarding pay progression, they will go elsewhere. Teachers will be particularly wary of moving to London schools where the pressures on our pupils and their communities can mean that it is a greater challenge to meet externally imposed targets. We also believe that schools should continue to honour teachers’ previous salaries on the main and upper pay scales. Without this guarantee, experienced teachers will be unwilling to move from their existing post, or to apply to take up a new post.
Teaching Unions believe that schools should adopt a common six-point Main Pay Range and three-point Upper Pay Range, and consistently award pay progression, as proposed in our checklists. Any other approach is bound to lead to significant division and ill-feeling. Governors will inevitably face a rising workload in handling complaints, grievances and claims for potential discrimination.
Staff who feel valued and supported will make a far greater contribution to school improvement. Schools work best where there is collaboration and trust between teachers. Performance-pay will divide staff and damage teaching and learning. OECD research based on international PISA studies shows that there is no evidence that Gove’s plans will improve education.