A serious challenge to be NUT Vice-President 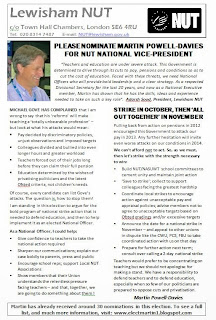 Ever since I was backed by LANAC to be a candidate for NUT National Vice-President in May, I have made clear to teachers that I intend to be a serious challenger in November's National Officers' election.

On Saturday, I was pleased to be able to report to LANAC's Steering Committee just how much backing I was receiving for my stand. As the growing list on the right of this blog shows, I have now been notified of around* thirty Associations backing my nomination across England and Wales. They cover a wide spread of areas - not just geographically but also in their traditional 'allegiances' within the Union.

I hope that support shows that I am seen as a candidate with a consistent record of building the Union, leading campaigns and calling for the determined action needed if we are to successfully defend teachers and education.

As I have stated in my latest flyer for nomination meetings ( http://goo.gl/OyhoZn ), I believe that, as a National Officer, I could help:
• Give confidence to teachers to take the national action required
• Sharpen our communications; explain our case boldly to parents, press and public
• Encourage school reps; support Local NUT Associations
• Show members that their Union understands the relentless pressure facing teachers – and that, together, we are going to do something about them !

Gove has criticised me for saying his 'reforms' will make teaching "unbearable" - but they will! However, as I also say in my leaflet, "every candidate can list Gove’s attacks. The question is, how to stop them!" Here's what I am calling for:

"Pulling back from action on pensions in 2012 encouraged this Government to attack our pay in 2013. Any further hesitation will invite even worse attacks on our conditions in 2014. We can’t afford not to act. So, as we must, then let’s strike with the strength necessary to win:
• Build NUT/NASUWT school committees to cement unity and maintain joint action
• ‘Save to strike’; collect to support colleagues facing the greatest hardship
• Coordinate local strikes to encourage action against unacceptable pay and appraisal policies; advise members not to agree to unacceptable targets based on Ofsted gradings and/or excessive targets
• Announce the date for a national strike in November – and appeal to other unions in dispute like the CWU, PCS, FBU to take coordinated action with us on that day
• Prepare for further action next term; consult over calling a 2-day national strike

Teachers would prefer to be concentrating on teaching but we should not apologise for making a stand. We have a responsibility to defend teachers and to defend education, especially when so few of our politicians are prepared to oppose cuts and privatisation"


* "around" because some are still to be confirmed with NUT Headquarters
Posted by Martin at 22:25

Email ThisBlogThis!Share to TwitterShare to FacebookShare to Pinterest
Labels: Martin4VP