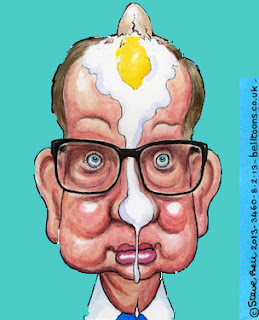 Now that I know that Michael Gove, or one of his civil servants, is following my blog, then let me be clear: " No Minister, I’m not guilty of 'hyperbole', your ‘reforms’ will make teaching 'unbearable'. "

If you're not Michael Gove, let me explain ...

It was only today, when a colleague pointed me to the transcript of Michael Gove’s speech to the Policy Exchange last Thursday, that I discovered that I merited a personal mention by the Education Secretary!

Gove scoffed that “Martin Powell-Davies of the National Union of Teachers National Executive has claimed that our education reform plans will make teaching ‘a totally unbearable profession’.” However, many teachers would agree that there’s nothing to scoff at in my prediction.

Being accused of ‘hyperbole’ by an ex-journalist is also a little rich. True to his roots, the Education Secretary also chose to be very selective in the facts he quoted to try and portray teachers as a contented profession.

Surveys of ‘school leaders’ and undergraduates will obviously not give a true picture of the feelings of classroom teachers. A more accurate picture was painted by a YouGov survey of teachers taken at the beginning of this year:

As you can see, 55% of respondents described their morale as “low” or “very low”, only 15% had 'high' or 'very high' morale. In further questions, 71% said they 'rarely' or 'never' felt trusted by the Government.

At the end of the survey, teachers were asked to give an open ended answer to the question "what other New Year’s Resolution would you like the Secretary of State for Education to make?". Not surprisingly,  the NUT reports that most popular response by a long way was “I will resign or something very similar"!

I publicised those findings, along with other reports showing a rise in teachers quitting the profession and significant increases in teachers taking stress leave, on this blog in January ( http://electmartin1.blogspot.co.uk/2013/01/get-rid-of-gove-before-he-gets-rid-of.html ).

Yet this was the very post where Gove’s researcher must have found my quote that “this is what teaching is already like in many schools before Gove tightens the screw of performance-pay even further. If he gets away with his plans, teaching will become a totally unbearable profession”. Strangely, the researcher was happy to ignore the evidence on which my conclusion was based!

I’m pleased that it seems to have dawned on Michael Gove that he needs to try and sound a little less anti-teacher and to try to praise our qualities in his speech. However, the damage has already been done*.

Neither do teachers need lectures to know about ‘the importance of teaching’. We know how important education is to the youngsters that we teach. That's why we are so determined to defend education from the damage being inflicted by this Government’s policies of privatisation, cuts and rationing of educational opportunities. 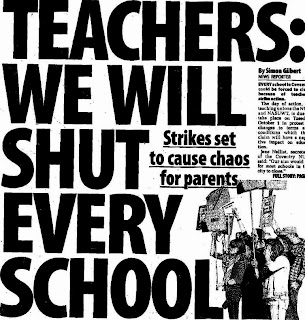 Whatever ‘our surveys say’, the real test of teachers’ views will come in October when the NUT and NASUWT have called the next regional strikes. As in the North-West in June, I suggest that the overwhelming response to the strike-call will show Mr.Gove just how out of teach he is with the real mood of teachers.

Of course, those strikes will be a test of public opinion as well. Once again, Mr.Gove may be in for a surprise. For example, following the announcement of our latest action last week, the Coventry Telegraph carried a banner headline “Teachers: We Will Shut Every School”. Gove might have hoped that such a threat would be met with parental protest – but the 'vox-pops' inside the paper reveal where any public protests will be directed:

Janet Smith, 65, Keresley: “I don’t think it’s fair to link teachers’ pay to performance in the classroom. You can’t really say how a child is going to react, can you?"

Jacob Peedell, 30, Radford: “If you are teaching in a deprived area, the kids aren’t going to do as well so I think that’s unfair. Obviously striking isn’t fair on the parents but I can understand why they are doing it!"

Elena Klink, 30, Whoberley, “Striking is the right thing to do because it’s the way for them to get what they need. I know how hard it is for the teachers to look after the kids”.

Those kind of views will be repeated in towns and cities across England. They should give teachers encouragement to make their real views clear to Mr.Gove - by taking strike action to oppose his damaging attacks on teachers and education.


* ... and Mr.Gove has just done more damage to his public image by his crass comments about food banks. Perhaps you're suggesting that, if teachers taught school leavers better financial management, they'd all be able to afford £7,000 furnishings like you Michael ?!
Posted by Martin at 18:43