United action can make us stronger

At the instigation of the NUT, but with the involvement of most of the teacher unions, a packed Professional Unity Conference met today in London.

As Christine Blower, NUT GS, described it, today was not more than a 'tentative step' towards 'one union for all teachers' but nevertheless it was significant that so many colleagues from so many different backgrounds and traditions were represented.

Messages of support to the event were given from NAHT and ASCL and opening speeches given by speakers from the NUT, ATL and UCAC as well as from OAJ, the union representing 95% of Finnish teachers.

Some individual UCU and NASUWT members were in attendance. However, regrettably but perhaps predictably given their present stance on joint national strike action, the NASUWT was not officially represented.

In part, the pressures on facility time, the costs of competing for membership and providing separate support and resources for members mean that, as with other parts of the trade union movement, teaching unions know that they need to speak together. However, that's not the critical issue for classroom teachers.

For colleagues battling against common attacks on pay, pensions, conditions and state education, building united action is vital to build collective strength against a common enemy. That is even more the case in the increasingly atomised education system in which we work.

Both the messages from the NAHT and ASCL made clear that they were more sceptical of a single union but wanted to find ways of unions speaking together with a common voice as much as possible.

Mary Bousted, ATL GS, speaking by video, rightly suggested that in principle we would be "better together" but warned that any such move would have to be carefully prepared. Mary made clear that the ATL would be looking towards a new union with a new rule-book and constitution.

Those details will, indeed, be critical. 'Unity is strength' has long been a watchword of the trade union movement. But that strength needs to be used. Building a larger union that doesn't have collective action at its core would be a waste of that potential strength.

Any rulebook needs to make sure that a new Union has democratic and inclusive structures that ensure that the discontent and concerns of classroom teachers drive decisions. I would be confident that a union rooted in its members in this way would be a union that would also stand for bold collective action and campaigning to defend teachers and education.

Howard Stevenson reminded the Conference that teachers first became organised to oppose payment by results and to win national collective bargaining. Far from 'opposing change' as politicians sometimes claim, Howard pointed out that teachers helped implement tremendous progressive change in the 60s and 70s. However, when Governments switched to policies that sought to reverse that progressive change, the division between teacher unions made it harder to oppose that 'pushback'.

Howard called for more organisation at workplace level, fighting on professional concerns as well as on pay and conditions. The conclusion he drew was, to build that collective voice, teacher unions must work together. He pointed to DfE research that pointed out that 97% of teachers were unionised - a huge potential barrier to those who want to dismantle comprehensive education - but divided across multiple unions.

The discussion showed that, while today might only have  been billed as a 'tentative' step, teachers want concrete steps towards unity to be taken speedily.

The workshop feedback produced a series of suggested initiatives including follow-up regional meetings to promote professional unity amongst teachers, cross-union joint reps' training and regular local meetings of reps and local officers to work on united action and campaigns.

Joint meetings in schools, discussing the common problems we face, and the action needed to confront them, will be vital to build that unity at school level. 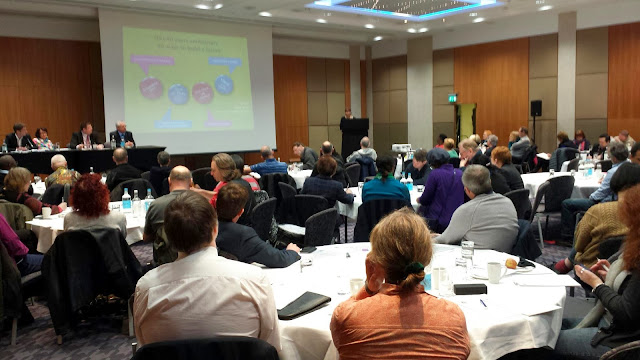