ASA Ruling - let the facts speak for themselves

The news has been broken by Schools Week tonight that the Advertising Standards Authority Council has found in favour of the Department for Education (DfE) and ruled that it was not misleading to claim that teachers could earn up to £65,000 in salary.

As I wrote to the ASA on being told the outcome of my complaint, "I can assure you that when this ruling is released then it will be greeted with dismay and anger ... and the Council decision will damage the reputation of the ASA in the eyes of many teachers". Now that Schools Week has broken the news, I believe that my prediction will be proved correct.

Earlier this year, and fearing that the continued delays might suggest this outcome, I wrote saying that "I trust that the ASA will be able to withstand the undoubted pressure that will be coming from the Department ... There are considerable numbers of teachers who are now also patiently awaiting an outcome and maintaining their faith in the ASA to make a principled decision".

The decision has now been made. I can only leave it to others to look at the relevant facts and decide if it was a principled one.

I will respect the confidentiality asked of me by the ASA in not publishing the earlier draft recommendations of the Investigations Team which had been sent to complainants for comment, recommendations which had suggested a rather different outcome. However, with editing only so as not to reveal exactly what those recommendations concluded, I am posting below the additional comments that I submitted in response:

"I am writing in response to your email of 15 December inviting me to submit any further comments on the draft recommendation that addresses the complaint that I submitted, alongside over 100 other teachers, to the "#teachersmake" advert produced by the Department for Education.

Firstly, having again replayed the advert, I would like to concur with your finding that its premise was clearly to encourage potential recruits to think of the financial benefits that could result from becoming a teacher. Both the ‘#teachersmake’ hashtag and the opening line of ‘what does a good teacher make these days?’ were clearly aimed at making those watching reflect on teacher salaries. Even while statements were being made about how teachers also ‘make’ benefits for their school students, the on-screen text referred to ‘salaries & bursaries’. However, these comments were only a lead-in to the intended conclusion of the advert, when the comment is made "and if you’re wondering what else a good teacher makes, it’s probably more than you think", followed by the concluding, and in my opinion highly misleading, on-screen text "Up to £65k as a great teacher".

The advertisement caused immediate dismay amongst the teachers that I am in contact with as it [in my view] created a false impression that classroom teachers could have a reasonable expectation of earning salaries approaching £65k. This is, as the DfE’s own figures have now confirmed, simply not the case. Only 485 classroom teachers are paid this amount, approximately 1 in every 1000 teachers.


Not only has this exaggerated claim misled potential recruits to the teaching profession, it has also potentially misled other viewers, including parents of schoolchildren, who may now have a false impression of the salaries that their children’s teachers earn, potentially causing difficulties in parent-teacher relationships as well.

To add a new set of data available to the DfE which they have not referred to, the School Teachers’ Review Body noted (in Chapter 3 of its latest 2015 Report) their concern that, compared to the average for graduate professions, teachers make slower salary progression. Once again, the DfE’s implication that teachers can make rapid progression to such high salaries is simply not backed up by their own facts. 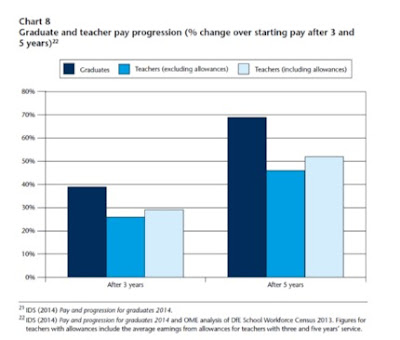 The DfE ... chose the figure of £65k precisely because it is the highest figure that can be paid to a classroom teacher through the application of the Leading Practitioners scale, set down in the latest STPCD.

First of all, it is clear that £65K is only ever achievable in the Inner London area alone. A defence that, because the on-screen text mentions that salaries are ‘subject to location’, is completely inadequate. The text is not carried alongside the concluding figures and, in any case, even if it had been, this would have done little to correct the false impression that salaries of ‘up to 65k’ could be attained if you were a ‘good teacher’. Centrally, the whole advertisement is based on this premise which, as the statistics show, is a false one.

It might also be worth noting that, not only is a salary of "65k" highly unlikely to be achieved, even a salary of over £50,000 is only reached by a small minority of classroom teachers. Again, referring to the DfE’s own statistics as set down in Table 9a of the latest school workforce data, just 2% of teachers can expect to earn salaries of £50,000 or more; 80% earn less than £40,000. I have produced the data (excluding those where salaries were ‘unknown’) in graphical form below: 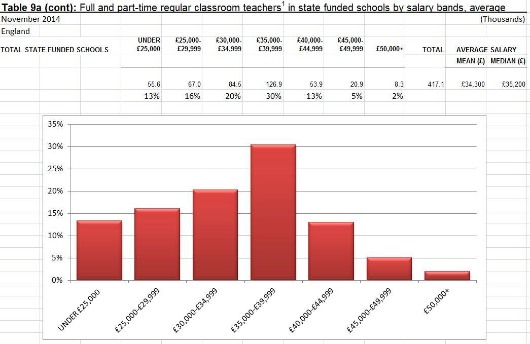 In conclusion, I am willing to accept that the aim of the ad was to inspire and motivate viewers to enter into the teaching profession. However, making false claims will only undermine such efforts and demotivate recruits who will find only too quickly that they have been misled".

The ASA Council have reached a different conclusion. I can only post my opinion and let the facts speak for themselves.
Posted by Martin at 20:58

Email ThisBlogThis!Share to TwitterShare to FacebookShare to Pinterest
Labels: #teachersmake