This afternoon, NUT Annual Conference voted overwhelmingly for a Priority Motion on 'The White Paper: The Wrong Priorities' which includes a call for a ballot for discontinuous action to begin with a one-day strike before the end of the summer term and to seek to coordinate action with other unions too.

The full agreed motion covers a wide range of explanatory points, including in summary:
* congratulating those who signed the two 100,000 petitions
* that Government mismanagement is creating a crisis in education, with teacher shortages, insufficient school places, severe funding shortfalls and reforms that threaten to turn schools into exam factories.
* mounting an immediate campaign explaining why the white paper proposals are the wrong priorities.
* condemns its underlying principles of deregulation and proposals to replace QTS with accreditation solely decided in schools.
* believes there is no electoral mandate for what the FT has called "a risky experiment" and that it is now clear the Government is intent on creating an education market place which will have privatisation as an ultimate aim.
* believes the white paper ignores a growing body of evidence and will lead to chaos, teacher turnover and even lower morale, removing democratic participation of parents.
* that the fragmentation and disruption will put education at risk.

It instructs the Executive to :
* urge all school unions to jointly campaign to defend state education.
* work together to develop alternative policy proposals that support genuine school improvement and local democratic accountability.
* seek wide support for a unifying statement calling for urgent action on the real priorities and a halt to further academisation to enable a national debate over the future direction of education.
* bring together a coalition to promote and protect state education with activities including a mass lobby of parliament, a national demonstration and regional lobbies.
* prepare materials for teachers and parents and organise stalls and activities to mobilise support
* consider holding a public inquiry to examine the track record of academies

Finally, it instructs the Executive (here quoted in full) to:
i. Recognise the threats to jobs, pay and non-pay terms represented by the funding cash freeze and the intention to academise all schools and therefore to declare a dispute with the Secretary of State seeking more funding and a common system of pay and conditions to apply to all state funded schools in England and Wales, using the lessons of our defeat of the Government legal challenge over the sixth form colleges dispute;
ii. Recognise that these threats apply to all school staff, and therefore to encourage all other education unions representing teachers and support staff to declare similar disputes, sharing our legal advice with them;
iii. Specifically approach ATL, GMB, NAHT, NASUWT, UNISON and UNITE to seek agreement on a common plan for a ballot for discontinuous strike and non strike action;
iv. Present for discussion with those unions a timetable to begin with a one-day strike before the end of summer term;
v. To enact this timetable and action with any union willing to join us in the summer term, but otherwise to enact it ourselves - and then seek to coordinate further strikes in the autumn term with unions able and willing to join us then;
vi. Recognise that inadequate funding in Wales also threatens jobs, pay and non-pay conditions of teachers and that the effective abolition of national pay and conditions in England would accelerate moves to devolution of pay and conditions to the Wales Government to the inevitable detriment of teachers in Wales.
vii. Recognise that our fight is part of the wider battle to defend public services and therefore to approach the BMA to explore the possibility of coordinating our campaigns and action;
viii. Recognise too that in order to win the national ballot extraordinary measures will be needed at every level of the union.

Conference has decisively agreed a plan of action. Now every step must be taken to decisively win the ballot, to defend teachers' jobs, pay and conditions and, in doing so, to defend education as a whole. 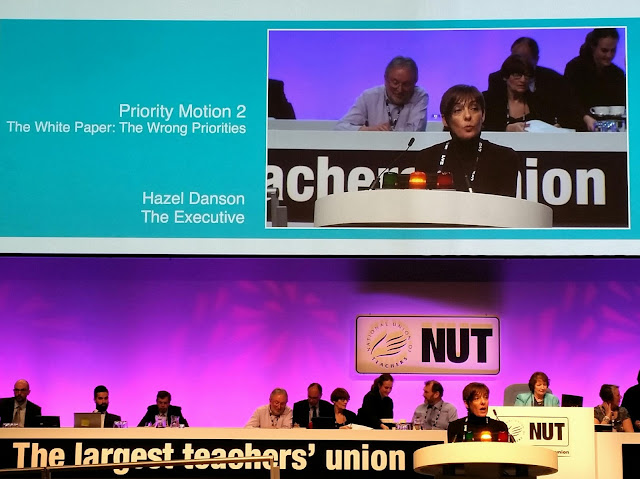