Today, I was asked to contribute on behalf of the NUT to a feature being broadcast tonight by BBC London News on 'Free Schools' - the label given by the Government to a particular type of academy, one that is opening as completely new provision. 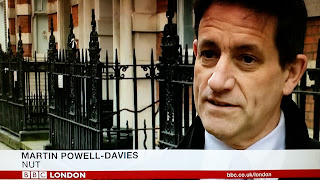 I was happy to contribute to explain that there is no evidence to back up the Government's claim that their ideologically-driven plans for forced academies and new 'free schools' will improve education. On the contrary, they will destabilise and damage education.

As I explained in the few seconds that I was given by the BBC, the Tories' privatisation plans will fragment schooling, with different academy chains working in competition instead of co-operating together. Yet, school partnership, fostered by the 'London Challenge', is felt to be the secret to much of London's educational success over recent years.

Free Schools - the facts
I also explained that Free Schools will operate in isolation with no Local Authority to back them up when things go wrong - as they will. As the NUT edufacts page explains:

Academies - the facts
The real facts about academies are summarised in a recent post by the Local Schools Network .Their statistics show that schools are far more likely to remain 'inadequate' (in Ofsted terms) if they become sponsored academies and that sponsored academies' results increase at a slower rate than maintained schools. To quote just one of their statistics: "of the top 20 Multi-Academy Trusts, only 3 achieve value-added for their pupils that are above the average; 17 of the 20 achieve below average value added".

The official data analysed by the LSN "points to one clear conclusion, that conversion to become a sponsored academy, on average, slows the progress of a school". The post concludes that "the central challenge for English schools is now arguably the poor performance of sponsored academies, when compared to similar local authority schools. While government policy is based on an ideological objection to local authorities, the data is clear. Indeed it is hard to think of any educational policy in living memory more likely to lead directly to worse performance for schools".

Selective facts - and selective education
With consistent agreement across a range of researchers about the lack of educational evidence in favour of academies, I was surprised at what I was told when I reached the BBC today. The reporter explained that I would be taking part in a feature discussing how data from the pro-academy New Schools Network purported to show that Free Schools outperformed other schools in London at post-16 qualifications.

It seems an unlikely claim, particularly given the difficulties at the 'Tech City' 16-19 Free School in Islington, where NUT members recently took strike action as I explained on this blog back in November. It would certainly have to be a conclusion based on a very small sample of schools as there is little existing 16-19 Free School provision in London.

Having now seen the bulletin broadcast on BBC London News tonight, it seems the claims are mainly being based on the success of the King's College London Maths School in Lambeth, the Free School featured in the programme. Yes, the exam results of the KCLMS are very good but is that any surprise when you consider its intake?

To be accepted at KCLMS you need at least an A or A* in GCSE Maths and Science/Physics, then to attain the 'threshold mark' in the KCLMS' own admission test and then be selected at interview. In short, this is a highly selective 16-19 institution, making any comparisons with comprehensive maintained schools completely misleading.

Far from justifying the Conservatives' academy plans, the New Schools Network's spurious claims really serve to highlight another dangerous aspect of this divisive policy - it will mean an acceleration in pupil selection. The academy chains, who would have almost total control over school admissions nationally, will compete with each other to enrol the children that will boost league table scores at a low cost - and undoubtedly find ways to exclude those who don't

It is for good reason that the NUT has condemned the Tories' plans as "undoing over 50 years of comprehensive public education at a stroke". They must be defeated.