Cutting pensions: A political decision, not an economic necessity

The battle is on to defend our pensions. We'll be balloting for action in the spring term. Here are some key arguments to help you build for that action:

Taken from the NUT website:  http://www.teachers.org.uk/notocuts
(look under the Protecting your Pensions section for a powerpoint and speaker's notes). 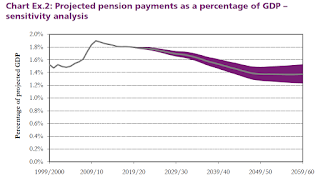 Yes, spending will rise in the short term, as an ageing workforce with protected pension rights reaches retirement age.  The most recent projections confirm, however, that while the cost will go up in the short term from around 1.7% of GDP in 2006-7 to around 2 per cent of GDP, it will then fall back to around 1.4 per cent of GDP (assuming the switch from RPI to CPI indexation goes ahead).

In previous years, of course, when contributions into the pension scheme exceeded pension payments from the scheme, the Government simply kept that money.

Public sector pensions are affordable.  Costs will fall as planned.  The attack on our pensions is a political decision not an economic necessity.

In short, this information from the NUT website shows that, even using Hutton's own economic arguments, the attack on our pensions is just plain robbery.

Of course, if the wealthy financiers that caused the crisis were made to pay their way, then our pensions and public services could be improved - not cut at all. But good arguments alone can't shift this government - but co-ordinated national strike action can.