Lewisham needs its jobs and services 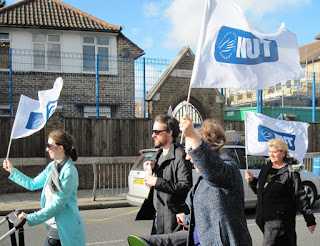 In July, trade unionists and service users lobbied Lewisham Council to protest against the plan to cut millions of pounds from council services. Four months on, the Mayor and Cabinet are meeting to finally agree that cuts package.

Lewisham Teachers’ Association (NUT) is calling a lobby once again to say:

DEFEND JOBS
Council officers have written to the NUT and other unions to tell us that the cuts going to the Cabinet meeting  will mean 446 staff  losing their jobs.
But Lewisham already has the worst ratio  between job seekers and job vacancies in  the whole country.
These cuts will make it even harder to find jobs.

EDUCATION
Cuts to Lewisham’s School Improvement Team will mean less support for schools.
The ‘Phase 2’ cuts round could see more services suffer - such as loss of vital support for Traveller Pupils and the possible closure of the Lewisham LLDCentre in Kilmorie Road. Schools need central support - not left to work alone.

The Lobby is also being called by Lewisham Anti-Cuts Alliance, Lewisham Trades Council and Save Lewisham’s Libraries Campaign.
Posted by Martin at 21:05