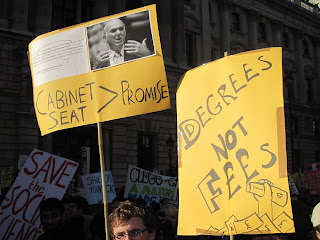 Young people - and their parents and teachers - have every right to be angry. Their hopes of a university education are being snatched away from them by a Government that wants them to pay £9,000 a year tuition fees. When you add on the other costs of funding a young person through college, how many working-class - and middle-class - families can afford to take on that kind of debt mountain?

Of course, the real debt mountain has been created by the banks and the bond markets - but  they want us to pay for it.

On top of that, the Education Maintenance Allowance is being scrapped to be replaced by  'targeted support'. But, as the latest TES FEfocus editorial correctly put it, "The new "targeted" support is just a euphenism for cuts ... [it is] an admission of defeat disguised as a policy. It says that you cannot create the conditions where all young people will want to stay in education or have the money to afford it. This is not a situation that a wealthy, advanced country like the UK should ever have to face".

That is the brutal truth - that the Government are admitting that they have no intention of offering young people a decent future. That shocking truth has perhaps hit home the hardest on those young people in sixth forms that had, until now, always expected to go to university. Small wonder that some have decided that they will be joining older students on the protests organised for Wednesday November 24th.

Haberdashers' Aske's School in my Authority, Lewisham, is one of the schools where the press have publicised that students are planning to protest on November 24th. As I told the South London Press, this would be a decision for the students and their families to make, not their teachers. Teachers cannot encourage pupils to be absent from school.

However, I think many people will consider that young people who take a collective decision to protest about such a threat to their futures should not be treated as if they were just unthinkingly 'truanting' lesons. That's why I have contacted the school and asked that they do not take disciplinary action against those who do take part in the protest.

Britain is indeed a wealthy country. That wealth should be invested in the futures of our youth, not squandered on the gambling debts of the bond traders and bankers.

The 50,000 strong demonstration on November 10th showed how a younger generation can help inspire an older generation to use the power of organised trade union struggle to oppose these devastating cuts - and to demand that a decent education should be a right for all, not just a privilege for those that can afford it.
Posted by Martin at 20:07