Having been invited to speak as a member of the NUT Executive at the rally to be held before today's march in London to protest about tuition fees and EMA cuts, I arrived in Whitehall to find that the march was already stationary at the entrance to Parliament Square and surrounded by police cordons. 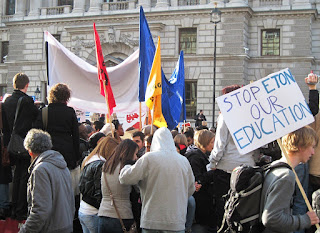 It was clear that some protestors were angry - the 'kettling' tactics were only making things worse. However, most of the young people there were entirely peaceful - just frustrated at not being able to continue the march.

What was the justification for the cordons - put in place before the police van was rocked which I have just seen the BBC give as the reason for the 'kettle' - not after? A route had been agreed beforehand by the police with the march organisers - it seems that the police then decided to ignore that agreement.

I manged to blag my way through and back out of the police lines and talked to a few demonstrators. One was clear that she had seen what seemed like 'provocateurs' deliberately pushing over fences and that she had warned youngsters not to join in.

If I had spoken to the rally, I was going to point out that a previous Tory PM had been thrown out twenty years ago - not by a poll tax 'riot' but by the mass action of millions of people organised against the poll tax in every part of Britain.

Young people have every right to be angry. That anger needs to be channelled into an organised movement of trade unions, students and communities to challenge a government that is trying to steal away young people's future and the public services and benefits that have been won by the trade union movement over previous generations.
Posted by Martin at 15:35