Other updates from the November National Executive

The key decision taken at November's NUT National Executive was obviously the unanimous vote to ballot for strike action over pensions in the spring term, but here is a summary of some of the other discussions:

National Demonstrations
The Executive congratulated the NUS and UCU  for the excellent turnout on Wednesday's demonstration. The NUT will be talking to the UCU about co-ordinating our actions together. The NUT will also be building for the TUC's national demonstration on 26 March. We had supported the PCS union in their argument that the TUC needed to show a greater urgency and organise a demonstration before then. Unfortunately, most other public sector unions have not supported us - but plans are still being discussed. 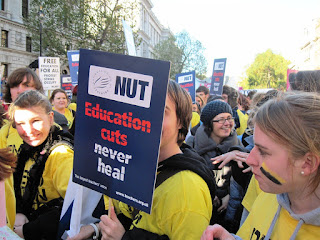 Action to Defend Central Services
Schools are waiting to hear firm news about their budgets but many boroughs face immediate cuts to their advisers and other central teams. The NUT Executive agreed that we must expose the educational damage that these cuts will cause - and that we will support ballots for strike action - across the whole of a Local Authority if necessary - to  oppose them.

More attacks on pay and conditions on the way
Michael Gove has written to the School Teachers' Review Body signalling that he wants a further review in the spring into "the introduction of greater freedoms and flexibilities... to reduce the rigidity of the existing pay and conditions framework". He may try to rush through these attacks by September 2011. The Executive agreed to seek joint teacher union opposition to these attacks.

Sixth Form Colleges Consultative Ballot
For September 2010, most teachers still received a 2.3% award - at least a small increase on our salary slips. But teachers in sixth form colleges - where negotiations are ongoing - have been offered a derisory 0.75%. Ballot papers will be going to affected NUT members recommending rejection of the offer and also recommending that they show their support for strike action on the issue.

Workload
The new booklet summarising NUT policy and teachers' rights on workload has been issued to school reps. An updated classroom observation policy is also available on the NUT website. The Executive also agreed that we will be making lesson planning a particular focus for campaigning in the New Year.
Posted by Martin at 09:47