Downhills on strike today against academies

There was a fat cat lurking on the gates of Downhills School in Haringey this morning - although he bore a passing resemblance to an NUT member in a borrowed costume! 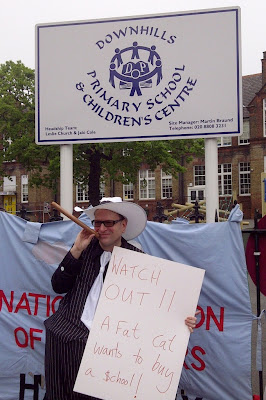 Today's strike at Downhills School was to expose and oppose its forced privatisation into the hands of Harris Academies.

The stand taken by NUT members - and the wider school community - at Downhills is just what is needed to show that teachers and parents aren't going to just stand by and let community assets be handed over to the fat-cat friends of Gove and Cameron. 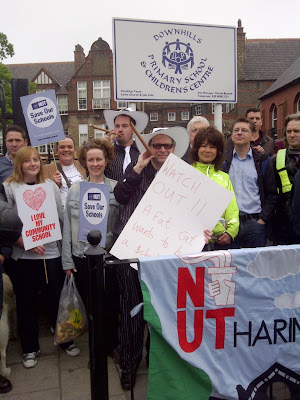 Teachers came from a number of NUT Associations to support the picket-line and staff and parents were gathering later in the park for a picnic and fun-day with Michael Rosen coming to show his support as well.
Posted by Martin at 11:00