Why I'm standing for TUSC in Thursday's Assembly elections 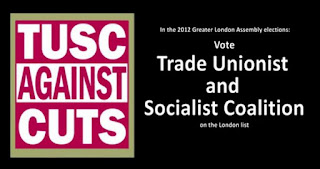 See my election video on: http://youtu.be/6qF9trLf99w

Thursday's elections for the Greater London Assembly provide a great opportunity to elect candidates who will stand out against the pro-cuts consensus from all the main parties. The TUSC challenge has a real chance to succeed in electing at least one assembly member. This would be a real breakthrough for everyone who wants to defend education and public services from cuts and privatisation.

Education is under attack from this Government: budgets are cut, schools facing forced privatisation, workload at intolerable levels - yet young teachers are told they should work until they’re 68! But, shamefully, New Labour’s leadership won’t oppose these attacks: Ed Balls won’t reverse cuts, Stephen Twigg supports Free Schools, Ed Milliband opposes trade unionists striking to defend their pensions. NUT conference confirmed the Union’s position of ‘No Cuts’ and condemned Labour leaders for saying they would maintain the bulk of the Coalition's cuts and austerity measures.

The NUT is also committed to opposing the BNP in elections. In London, the BNP won an assembly member on the ‘list’ last time. Voting TUSC can help knock out the BNP.

In Thurday's GLA elections, please use your vote for the all-London list - on the orange ballot paper -  to vote for the Trade Unionist and Socialist Coalition