Delegates gathered in Torquay today for what could be a very important NUT Conference for the future of the ongoing pensions dispute. Significantly, a fringe meeting organised at short notice by a range of NUT Associations under the banner of 'Local Associations for National Action' attracted over 100 delegates - the biggest fringe meeting of the opening night. 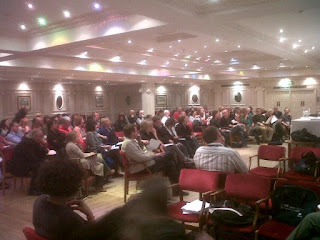 I spoke on the platform alongside ex-President Nina Franklin, Julie Lyon-Taylor, also from the NUT Executive, and Local Association Secretaries. All those present expressed their determination to build a clear strategy for ongoing action and agreed an amendment to be put to the Priority Motion that will be debated at the Conference tomorrow afternoon. It called for national strike action alongside other unions in early May as part of an ongoing calendar of regional and national action. The meeting also agreed to support a Local Associations Conference later in the year to build on the meeting and to gather further local association representatives together to hammer out a strategy to successfully defend teachers and education.

The most significant contribution in the opening session, of what is largely formal business at the start of Conference, was by Themis Kotsifakis, General Secretary of OLME, the secondary teachers’ union in Greece.

“Public sector wages face cuts of up to 55% in their wages, pensions are being dismantled and social spending slashed. They are privatising services, ripping-up collective agreements, increasing taxes on workers – but not, of course, on the big business tax evaders”

“They blame workers for the crisis – it’s a big lie. They say they are reducing the debt – it’s another big lie – their austerity policies mean the debt is increasing”

“Unemployment has officially doubled, children arrive hungry in our schools. Education is now under custody of the Troika, and they are looking to cheap-rate schools that are subject to the laws of the market. 1,056 schools have been closed, libraries and support teachers cut. There are 20% fewer teachers, 40% cuts in wages, retirement ages have been increased, but pensions cut”.

“We understand that our demands must be political – we declare that there is a solution: – we must refuse to recognise this debt –and the Troika must leave the country. We must overthrow neo-liberal policies throughout Europe”.

“The Government responds to our strikes and demonstrations with violence and tear-gas. But Greece is just the point of departure, they want these policies to be implemented across Europe. Our response should be co-ordinated action across Europe – workers, youth, social movements together”.

“We know your Government is adopting the same policies of cuts and austerity. Those who benefit are the banks, the stock-markets and the big companies. It is our duty to overthrow these policies and to stop them dismantling the welfare state and public education”.