On 3 May - Vote against the pro-cuts consensus 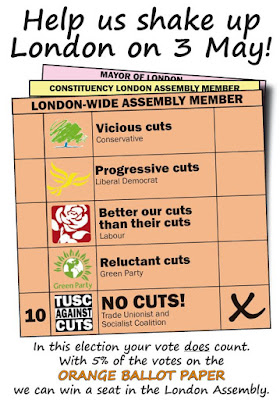 This is a government of the rich for the rich. That is the inescapable message of the Lib-Con coalition's ultra anti-working class budget and the whole cuts agenda. The claim that 'we are all in it together' lies in tatters.

But the working class is left without a political voice to challenge this onslaught because Labour puts up no serious opposition. Its leaders, Eds Miliband and Balls, have basically backed up the Tories, claiming they would maintain their cuts and can't even commit a future Labour government to reviving the 50p tax rate on the super-rich. Labour cannot effectively challenge the destruction and privatisation of the NHS because it had similar policies in government.

That is why the Trade Unionist and Socialist Coalition (TUSC) was set up by leading trade unionists and socialists, including the Socialist Party, to provide a political voice to the millions who oppose the cuts.

TUSC is standing 133 candidates in 39 councils. In addition there is the TUSC list of 17 candidates for the Greater London Assembly, and the TUSC candidate for the mayor of Liverpool, Tony Mulhearn.

In Coventry the 17 candidates, including TUSC national chair and Socialist Party councillor Dave Nellist (standing for re-election), have endorsed the TUSC local elections policy platform (below) but are appearing on the ballot paper under their established electoral name, Socialist Alternative.

The London list is headed up by Alex Gordon, president of the RMT transport workers' union. The full list includes leaders of the fire fighters' union, the teachers and lecturers' unions, the prison officers' union and many other prominent activists.