On the last night of NUT Conference, over 150 delegates crammed into an emergency recall meeting of ‘Local Associations for National Action’ , backed by a range of Local NUT Associations who had called the original pre-Conference meeting that was held on Friday April 6. 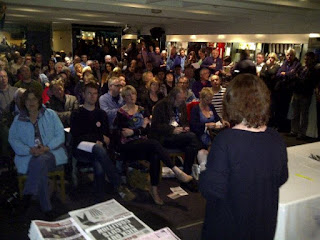 There was an electric atmosphere as delegate after delegate made clear their determination to continue the fight to defend pensions – and their determination to keep the pressure on the National Executive to announce the clear calendar of strike action that had been voted for by Conference.
A number of actions were agreed by the meeting, including:
Hopefully the turnout and mood of the meeting gave confidence to all those present to build our grass-roots opposition to the attacks facing teachers and education – and can give confidence to the NUT National Executive to stand firm and call the ongoing strike action that is so urgently required.

There will be a short post-Conference meeting of the NUT Executive at lunchtime but this is unlikely to make any decisions on pensions action. However, the news of last night's determined meeting will already have been registered. Let's hope this quickly translates into the calendar of strike action that can defeat the pensions robbery.
Posted by Martin at 09:01