Trade Unionist and Socialist Coalition - GLA elections on May 3 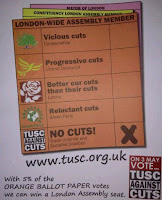 The Trade Unionist and Socialist Coalition (TUSC) is standing a list of candidates in the London-wide member list in the elections for the Greater London Assembly on 3rd May (on the orange ballot paper).

After the Bradford West result revealed the true bitterness felt by many voters at the pro-cuts policies of ALL the main parties - TUSC must have a real chance to get at least the 5% of the poll that's probably needed to get at least one assembly member elected to the Greater London Assembly. This would be a real breakthrough for everyone who wants to defend education and public services from cuts and privatisation.

If TUSC succeeds in winning a seat, it will also have the bonus of making it harder for parties looking for 'protest votes' from the far-right - not least the BNP - to get elected too.

I am proud to be standing as a teacher on that TUSC list.

That's why this list of  leading trade unionists is standing in the election to say no to all cuts and privatisation.  The list now has the backing of three trade unions general secretaries: Bob Crow of RMT, Matt Wrack of FBU and  Steve Gillan of POA.

TUSC isn't only standing in London but in Council seats around the country. Ex-Councillor Tony Mulhearn is standing as TUSC candidate for Mayor of Liverpool. To read more on Tony's campaign, read this link to his piece in the Guardian:  http://www.guardian.co.uk/uk/the-northerner/2012/apr/03/liverpool-mayor-election-tony-mulheard-trade-union-socialist-coalition

For more information see  http://www.tusc.org.uk/
Posted by Martin at 22:12