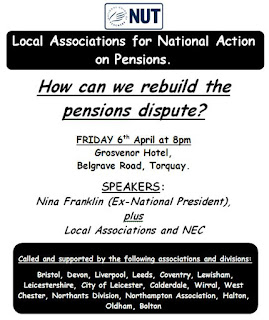 The NUT Conference in Torquay this weekend has a huge responsibility to all our  members, and to the whole movement, to decide on a clear plan of action to defend pensions.

After the massive joint strike on November 30, this Government could not have believed its luck when the leaders of unions like ATL and UNISON then swiftly retreated from the battle.

Weakness has only invited further attacks. While giving even more away to the wealthy top 1%, Osborne announced in the Budget that pension ages will be rising even faster. A teacher in their 20s might now have to work into their 70s to get their full pension!

While others ran for cover, unions like the NUT, UCU and PCS stood firm and regrouped, preparing their members for further national action on March 28. But that plan was scuppered when when a majority on the NUT Executive opted for a London Regional strike.

But the solid response to that London strike of NUT and UCU members can now be a springboard to the national action that is really needed. Thousands of strikers marched through the centre of the capital and even the DfE was forced to admit that the teachers' and lecturers' action caused 'significant' disruption.

But many strikers criticised the decision to go for just London action. Many felt that a regional strike could be too easily ignored -and the press did, indeed, try to do so.

Nobody wants to give up a day's pay for the sake of it. Workers need to know that their sacrifice is worth making - as it has been with the concessions won so far. It was national action that achieved them - and can do so again. National strikes are also far easier to co-ordinate with other fighting unions, like PCS, than regional ones.

Ministers and trade unionists alike need to know we are serious about winning this pensions struggle. The Priority Motion on the NUT Conference agenda proposes a flexible formula of "bringing all other regions and Wales, in turn or together, into pensions action". If regional action is agreed, then we have to set a clear and speedy calendar of rolling strikes. But my views is that a calendar of joint national strike action - perhaps escalating swiftly to a two-day strike - would be a more effective strategy.

Other unions like PCS, UCU, UCAC, EIS, NIPSA & UNITE Health may well be ready to join with us. A special ‘Classroom Teacher’ has been produced to urge delegates to the NASUWT Conference, in Birmingham, to join with the NUT and others in taking strike action, instead of standing aside from the battle.

I think that the immediate priority is for Conference to set a date for a further one-day national strike that will set the pensions battle moving forward once again. May 1st - always a significant date for trade unionists - could be ideal.

There will, of course,  be a range of views on what the best calendar of action might be. A number of Local NUT Associations are hosting a meeting on the eve of Conference to discuss the best option(s) to put to Conference as amendments to the Priority Motion which will be debated on Saturday afternoon.


NUT Conference Fringe Meeting:
Local Associations for National Action on Pensions
How can we rebuild the pensions dispute?