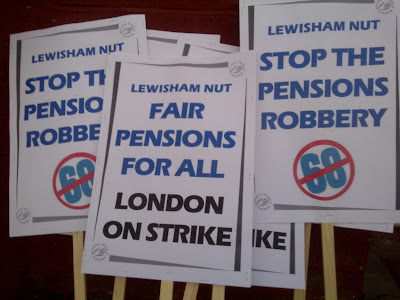 March 28 is the day when London NUT and UCU members show the Government - and our trade union colleagues who we want to see out in action with us next term - that the battle from pensions is far from over.

Teachers and lecturers have responded well to the call from their unions to take action. Even the DfE have had to admit that a 'significant' number of schools across London will be closed or partially closed by our action today.

We know that we can't afford to see our pay cut or let the Government get away with hiking our pensions ages up to 68 or higher. That's why we're on strike today.

A demonstration will assemble in Malet Street at 11am and go through the centre of the capital to the Department of Education. We'll also be joined by Visteon pensioners also protesting about the robbery of their private-sector pensions too. 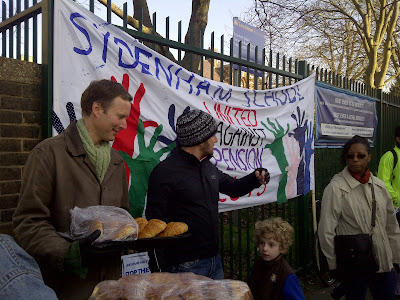 A passing street sweeper wishes pickets well and tells us "They want us all dead before we can retire so they don't have to pay any pensions" ... 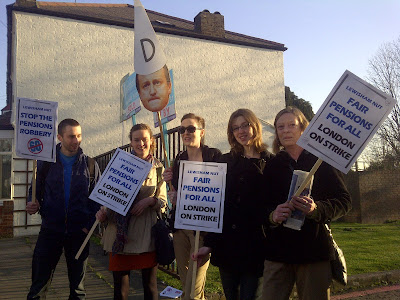 
Lots of messages of support are coming in from across the country:

Here's one from Cardiff:

On behalf of Cardiff Trades Council I wish to offer our Solidarity and Support to you and all NUT members who are taking action in London today. Whilst we appreciate the strike has been called today only in London we know there are may comrades across the UK and particularly in Wales who are thinking of you today.  Whilst we would have preferred today's action to have been wider, in terms of the unions involved, we know the fight for Pension Justice, for our Public Sector Workers is ongoing.

... and one from Northampton:

Best wishes and solidarity for your strike on Wed 28th March in defence of teachers' pensions. This is a campaign we cannot afford to lose - Teachers and public sector workers must not be made to pay for economic problems not of our own making. Pat Markey, Secretary Northampton NUT

... and from Remploy workers fighting for their jobs:

Fraternal greetings to all who are on strike today in defence of their pensions and to all others in struggle who are fighting in the biggest class war since the start of the industrial revolution from the consortium and delegates at the Remploy conference. Fight together agitate together and win together. Hasta La Victoria Siempre comrades,  Les Woodward
Posted by Martin at 06:52