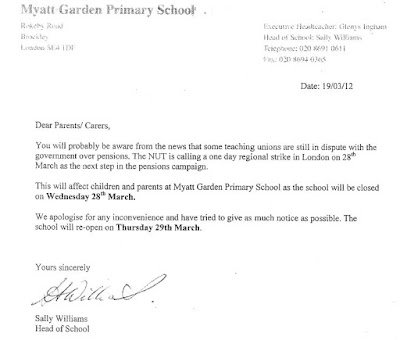 Myatt Garden School in Lewisham was one of the first London schools to send out a letter to parents today, confirming that their school will be closing on March 28 owing to NUT strike action - but they won't be the last!

The response from NUT reps today has been positive in Lewisham and elsewhere. Reports are already coming in of school groups confirming their support for strike action and making plans for pickets and attending the central London demonstration.

Andrew Baisley, Camden NUT Secretary, reported that "Initial indications from Camden look good. I attended a meeting at a Hampstead primary school this lunchtime. After some hard questions about why only London, they all agreed they are coming out. A rep from a one form VA primary reported solid support at their lunchtime meeting. Two secondaries have had meetings and both reps report solid support".

Details of the London demonstration assembly point have been confirmed as:
Assemble at 11am in Malet Street, London WC1E 7HY
(there will then be a march to Westminster - details of route still to be finalised).