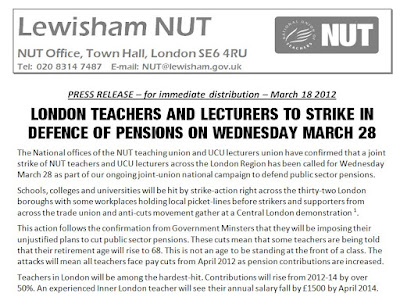 PRESS RELEASE – for immediate distribution: March 18 2012
LONDON TEACHERS AND LECTURERS TO STRIKE IN DEFENCE OF PENSIONS ON WEDNESDAY MARCH 28

The National offices of the NUT teaching union and UCU lecturers union have confirmed that a joint strike of NUT teachers and UCU lecturers across the London Region has been called for Wednesday March 28 as part of our ongoing joint-union national campaign to defend public sector pensions.
Schools, colleges and universities will be hit by strike-action right across the thirty-two London boroughs with some workplaces holding local picket-lines before strikers and supporters from across the trade union and anti-cuts movement gather at a Central London demonstration 1.
This action follows the confirmation from Government Minsters that they will be imposing their unjustified plans to cut public sector pensions. These cuts mean that some teachers are being told that their retirement age will rise to 68. This is not an age to be standing at the front of a class. The attacks will mean all teachers face pay cuts from April 2012 as pension contributions are increased.
Teachers in London will be among the hardest-hit. Contributions will rise from 2012-14 by over 50%. An experienced Inner London teacher will see their annual salary fall by £1500 by April 2014.
As Christine Blower, NUT General Secretary, has said in a letter to all NUT members:
“Our case is simple and just: The Government still hasn’t carried out the valuation of the teachers’ pension scheme and has produced no evidence to back its claim that our scheme, which was reformed in 2007, is unaffordable.
Yet teachers are still being asked to work longer, pay more and get less: Any teacher under 34 faces having to work to 68 or even longer to get a full pension. All of us are being asked to pay 50% more and to get much less due to the change in indexation.
The London action is just the start: The NUT is planning to take action in other parts of England and Wales and is seeking to bring other unions into this work, and these next steps will be discussed at our conference over Easter”.
Martin Powell-Davies, Lewisham NUT Secretary and a member of the NUT National Executive, said:
“This London-wide strike action will send a clear message to the Government, and the whole trade union movement, that the fight to stop this unjustified robbery of our pensions is far from over.  Teachers know that it’s just not possible to work on until we're 68. Instead, teachers will have to retire long before their full pension is due. The Government will steal much of what we’ve earned.”
“London teachers have been given the job of starting this next round of strike action. I am confident that my members we will seize this opportunity to show the strength of our opposition on March 28. Teachers outside London are sending their support and ‘twinning’ with London boroughs to pass on support and donations to hardship funds. For example, Lewisham NUT will be linked with Leicester.
1 - Details of the London demonstration are presently being confirmed with the police. Full information will be released as soon as the final route and timings are confirmed.
Posted by Martin at 16:29